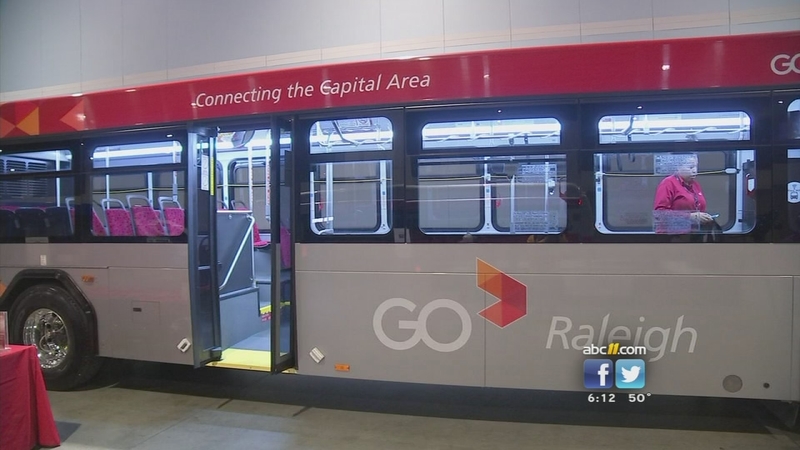 RALEIGH (WTVD) -- New and improved buses, more routes throughout Wake County and a rail system stretching 37 miles, all of this is part of a new transit plan unveiled by county leaders Tuesday. They revealed that plan on the showroom floor of the Raleigh Convention Center.

"Wake County is growing extremely quickly, we're adding 63 people a day," said Wake County Commissioner Matt Calabria. "We know traffic is increasing and we're going to face challenges associated with growth, this is the best thing we can do to stave off that congestion."

The plan, which comes with an estimated cost of $2.3 billion for the first 10 years, includes a new commuter-rail system that would stretch from Garner to Durham. The route would include stops in Garner, downtown Raleigh, NC State, Cary, Morrisville and the Research Triangle Park. The rail would operate on tracks shared with freight and Amtrak trains.

The bus system would provide new and more efficient routes between all 12 Wake County municipalities. There would be routes from all towns to downtown Raleigh. The plan also includes longer service hours, more routes and more frequent service. It will also link colleges and universities to employment centers, medical centers, dense residential areas and major downtowns.

Another part of improving the bus service is under a plan called the bus rapid transit. These are routes that run every 15 minutes during peak hours and use several techniques to stay on schedule.

Maloney said there would be station-like stops with ticket machines so you would no longer have to pay when you board the bus, which would speed up boarding time and hopefully speed up route times.

The plan includes about 20 miles of infrastructure improvement to accommodate for bus rapid transit. Four corridors already identified for this are:

The plan would also expand existing frequent bus services in the most densely populated parts of Raleigh and Cary from the current 17 miles to 83 miles over a 10-year period.

The cost of the plan would be paid for using local, federal and state funding sources. About $1.6 billion of the 2.3 billion total would be in capital investments (new buses, train cars, shelter and other infrastructure), with the remainder dedicated to operating expenses and fund-balance allocations.

Funding sources include a half-cent sales-tax increase that would be on the ballot in November 2016. Money would also come from vehicle registration fees of $10 a car. This would come if Wake County commissioners approve a $7 increase per vehicle and the GoTriangle Board of Trustees approves a $3 dollar increase.

County leaders say this plan would not only help ease traffic congestion in the coming years but would also improve the quality of life for those who can't drive and improve the economy.

The next step for this plan is to collect more public input, be approved by Wake County Commissioners and the GoTriangle Board of Trustees and the Capital Area Metropolitan Planning Organization Executive Committee.

Once the commissioners pass the plan, voters will then have to pass that half-cent sales tax in November.

Find out more about the plan here.