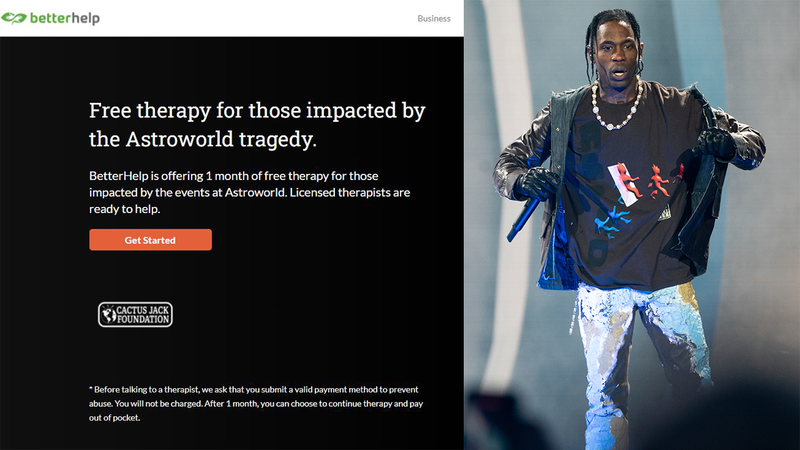 Breakdown of how disaster began at Astroworld Festival

HOUSTON, Texas -- Travis Scott will cover the funeral costs of the eight victims who died at Astroworld Festival Friday night at NRG Park, according to BetterHelp, a therapy service.

"Travis remains in active conversations to respectfully and appropriately connect with the individuals and families of those involved," the mental health service provider said Monday in a press release.

The rapper, who is a Missouri City native, also vowed to partner with the company to provide free one-on-one online sessions with a licensed therapist to those affected by the mass casualty.

Authorities reported eight people died and hundreds of others were injured that night. All eight victims have been publicly identified by family and Harris County Judge Lina Hidalgo.

BetterHelp is the world's largest therapy service, facilitating over 5,000 video sessions, chats and messages every month, according to the company.

Scott released a statement this past weekend, expressing his condolences to those impacted. He also said he was going to be cooperating with police and Houston city leaders as they investigate what led to the tragedy.

Scott's Cactus Jack Foundation will cover one month of therapy for those impacted.

After the first month, anyone who needs to can reach out to the foundation for additional coverage.

Roddy Ricch, who opened before Scott at the festival, also announced he's helping the families of the victims. On Instagram, the rapper said he will be donating his earnings from his performance to those families.

Why did the show go on? Astroworld timeline looks at when officials knew something was wrong