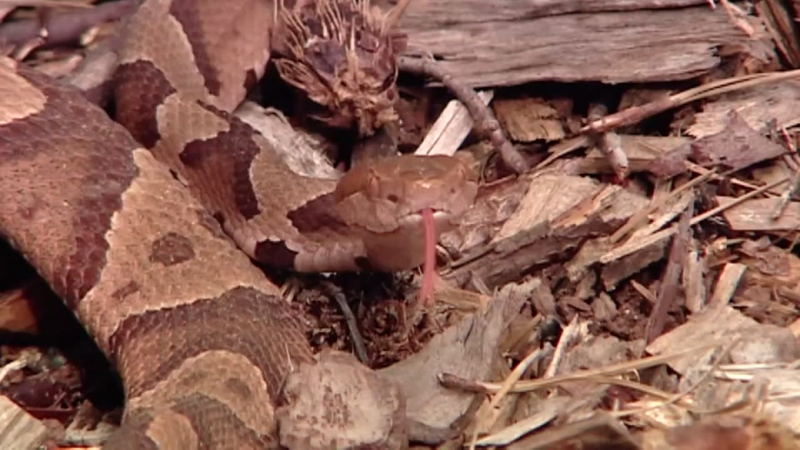 Breeding season has snakes slithering all over the Triangle

DURHAM, N.C. (WTVD) -- As Al Richards canvasses a crawlspace, searching corners and crevices, he explains that sometimes he sees a flicker of light and he know he's found the target.

"Their eyeballs do shine," he said while moving along the dirt on his hands and knees.

Richards is considered the "Snake Expert" at Critter Control. He said the company has been super slammed right now. It's snake breeding season and the business is getting up to eight calls a day.

"The biggest key to getting a snake is if you're keeping an eye on it and I can I get there relatively quickly. Two or three days out, the chances of me finding the snake are slim to none," said Richards.

Companies can remove the slithery serpents and then release them at other locations.

Richards said people should not take matters into their own hands, whether that be a black snake or copperhead.

"Killing them is detrimental to rodent control," he said. "They do so much good. If you started killing all the snakes, we'd be so overrun with rats and mice, which pose more of a threat with the viruses and the diseases that they carry."

Even if a snake doesn't make its way inside a home, it could be all around and could be dangerous.

Richards said snakes can easily wrap themselves around roots of a bush or plant.

"The junipers over there," he said while pointing to bushes, "That's probably the best snake habitat you have the find. The root systems are very extensive. The snake can get down in the root system and you'll never see them and you'll never get them out of there either. Especially a four or five-foot black snake, he'll wrap around that stuff and there's no way you can pull him out."

Folks are being encouraged to get a look around before a snake snaps and bites.