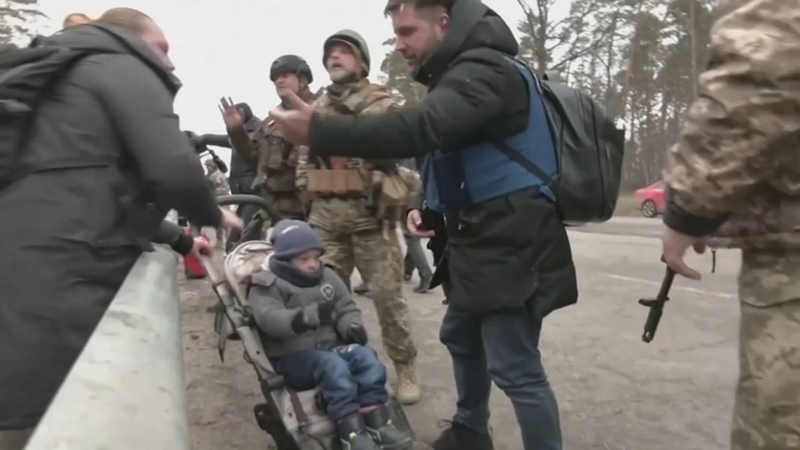 DURHAM, N.C. (WTVD) -- More than a million frightened Ukrainians have left their country, trying to avoid Russia's attacks. That humanitarian crisis has Americans showing support by renting Airbnb locations hosted by some of the refugees.

"I saw a posting on Facebook about renting Airbnbs in Ukraine and giving Ukrainians some money, so I rented his Airbnb for next week," said Eric Westrum of Durham. "A way to show them that we're there for them as much as we can be."

That decision led to a response from Airbnb host Dmitry Tyshcenko, in a video clip that Westrom shared with ABC11.

"I want to say, from all Ukrainian people to all Americans, thank you so much for your support," he said.

Westrum said he considers Tyshcenko a friend now and shared images from Ukraine.

"I have video of his daughter hiding under a table because she's scared of a bomb dropping on her. It's honestly beyond my realm of comprehension, what they must be going through right now," said Westrum. "I consider him a friend now, he's a genuine person. His first concern, when he saw the Airbnb booking was to make sure I got my money back. He thought I didn't realize there was a war there, and he wasn't going to be able to meet me."

Westrum said his friend made sure his wife and daughter were safe and far away from the fighting.

"Then he turned around and went back to Odesa because he's there to fight the Russians. He said in the video, "None of us is scared. We're here to defend our country and our town." I can't imagine that," Westrum said.

"I felt support from person to person, from heart to heart," said Tyshcenko. "This means that we are all together, and whole world with us in this war against Putin."

Westrum has plans for post-pandemic travel.