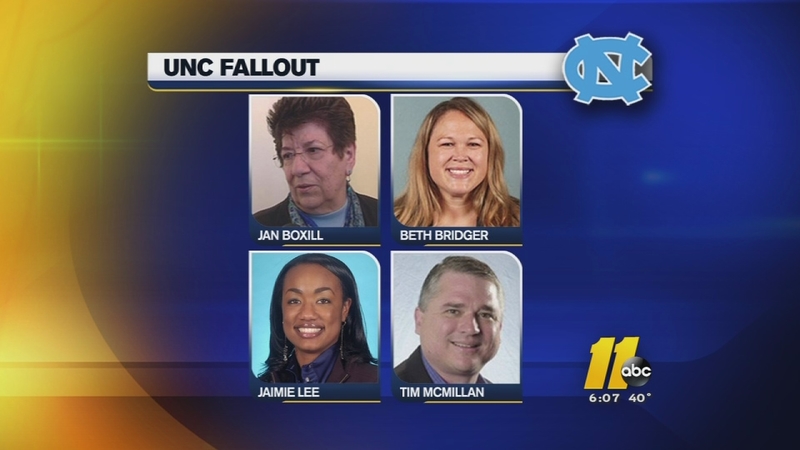 CHAPEL HILL, N.C. (WTVD) -- In a court settlement with ABC11 and a coalition of other media organizations, UNC Chapel Hill Wednesday released the names of four employees who were terminated or retired in the wake of the Wainstein report on academic fraud at the school involving student athletes.

At a news conference in October where the Wainstein report was first made public, the school initially said nine employees had been fired or disciplined and honorary status had been removed from another. But Wednesday there was a clarification. The school said in addition to the four employees who left the school in October, six more employees are currently under review, and could face disciplinary action early next year.

The names of the six were not released pending the outcome of those reviews.

Media outlets have been pressing for the names since October citing open records law - and eventually filing a lawsuit to get them. UNC initially declined to name them saying disclosure wasn't required until an employee had finished with the appeals process. Wake County Superior Court Judge Donald Stephens ordered all sides into mediation at a hearing earlier this month.

The names released Wednesday are:

Jeannette Boxill - who was former faculty chair, a senior lecturer in ethics, and an academic counselor for athletes at Chapel Hill. UNC said Boxill was told she would be terminated October 22, but she is seeking review of her proposed discharge before the University Faculty Hearings Committee.

Beth Bridger - who was the associate director of the academic support program for students before she transferred to UNC-Wilmington. She was fired by UNCW - also on October 22 - the day the Wainstein report was released.

Jaimie Lee - who was an academic counselor in the academic support program for student athletes. She was also given notice October 22.

Timothy McMillan - who was a senior lecturer and former associate chair for the Department of African American Studies. He resigned from university employment effective December 31, 2014.

UNC spent more than $3 million on the 130-page report compiled by former federal prosecutor Kenneth Wainstein and his team of investigators.

The report showed a pattern of fraud that spanned 18 years. It said 3,100 students were enrolled in so-called "paper classes" with the African and Afro-American Studies department that required little or no work. Investigators said student athletes were steered toward those classes to boost their grades and eligibility.

"It was a wrongdoing that could have and should have been stopped much earlier," said Chancellor Carol Folt in October.

Over the 18-year period, student-athletes accounted for 47.6 percent of the students enrolled in the paper classes. The inflated grades made a big difference to student GPAs. On average, they got a .03 grade point boost. For a number of them, it was the difference they needed to reach the 2.0 threshold. 329 students got an increase that pushed them above that level, and for 81, it was the difference that allowed them to graduate.

Both were no longer with the school when the Wainstein report was issued. In July, Orange County District Attorney Jim Woodall said he agreed to drop a charge against Nyang'oro in exchange for his cooperation in the investigation.

Of the four who were fired following the release of the report - and whose names were released Wednesday - Wainstein alleged Boxill not only knew of the classes, but steered student-athletes into them and even suggested what grades they should get.

In a memo made public Wednesday, Chancellor Carol Folt said the decision to fire Boxill was due to the "extraordinary circumstances underlying the longstanding and intolerable academic irregularities described in the Wainstein Report, as well as her role as chair of the faculty council during a period of time covered by the report, and in order to preserve the University's integrity."

The Wainstein report alleges Bridger knew the nature of the classes and that Lee allegedly steered student-athletes into them.

McMillan was accused in the report of not reporting numerous "red flags" in his dealings with Crowder within the AFAM department.

The NCAA reopened its investigation late this year based on information in the Wainstein report and the school could face future sanctions.

The Southern Association of Colleges and Schools also sent UNC-Chapel Hill a warning letter about its accreditation status in the wake of the Wainstein Report.

Once SACS completes its review and UNC responds, it will be up to the association to either put UNC on warning, on probation, or drop the school from membership.