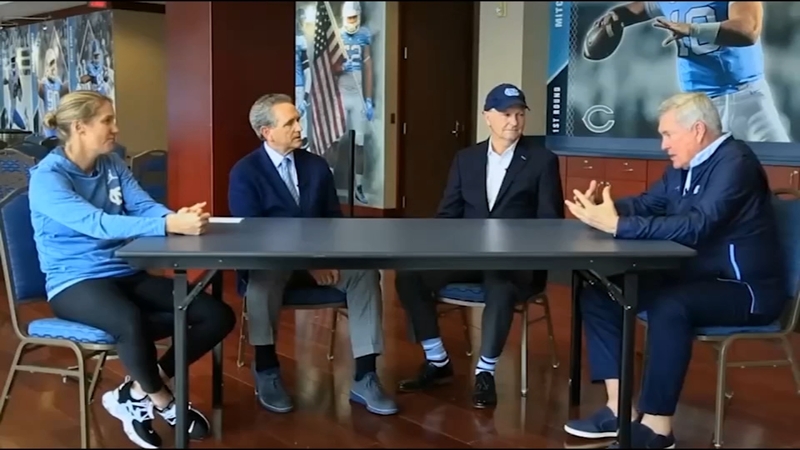 CHAPEL HILL, N.C. (WTVD) -- It didn't take long for UNC student Luke Buxton to get confirmation he was on to something important.

"Garrison (Brooks) came up to me and he said, 'thank you for your team for the entirety of "Uncut" for asking me a question outside of basketball. It's the first time I've ever been asked a question not related to the sport I play,'" Buxton recalled.

Buxton and his partners were inspired to create the Uncut platform after sharing a class with a half dozen UNC athletes and seeing them present about social issues that were important to them.

"It was the first time as a longtime UNC fan that I saw these athletes talk about their values, their passions, their interests. Things they cared about outside of their sport," Buxton said.

Uncut was born soon after. The goal -- to give athletes an avenue to share their whole self. Their interests, their concerns, their story.

Montgomery's story of the village that helped raise him into the person he is today was the first piece released by Uncut's new Duke chapter.

"I wanted to be the trailblazer and inspire other people to do the same and show other student-athletes that it's OK to be vulnerable and show who you are." he said.

Daniela Schneider helped bring Uncut to Duke. She'd had a similar notion before learning it was already in motion at North Carolina.

"Being a Tar Heel or being a Blue Devil is what's empowering about us coming together just because we are looking beyond the rivalry to realize that this is something that is going on with college athletes," she said.

There's an Uncut Boone now to tell Mountaineer stories at Appalachian State. The growth is proof positive of the need for athletes to expand the way in which they're perceived. Buxton is excited to watch the project take hold elsewhere.

Montgomery wants his fellow campus athletes to fully realize the power they can have.

"To allow the word athlete to be a muzzle to us is gravely discounting ourselves and our worth and our value," he said.
Report a correction or typo
Related topics:
sportschapel hilldurhamboonenccollege studentsrace relationsathletesuncdukerace in americarace and culture
Copyright © 2022 WTVD-TV. All Rights Reserved.
TOP STORIES
Snow fall begins in some parts of central North Carolina
NC prepared as winter storm brings rain, snow and sleet
Schools in Wake, Durham counties to close Friday
Contact tracers' role changes as pandemic reaches new heights
Flavor District, Triangle's largest 'ghost kitchen' to open in fall
Residents in Wilson prepare for black ice and snow
LATEST: Many testing sites closed Friday because of winter storm
Show More
Reporter hit by car on live television, but continued reporting
Check your tires before -- and after -- the wintry weather
American Airlines flight diverted over maskless passenger
'We can't get any more': Stores struggle to restock shelves
Essentials to keep in your car during winter storms
More TOP STORIES News