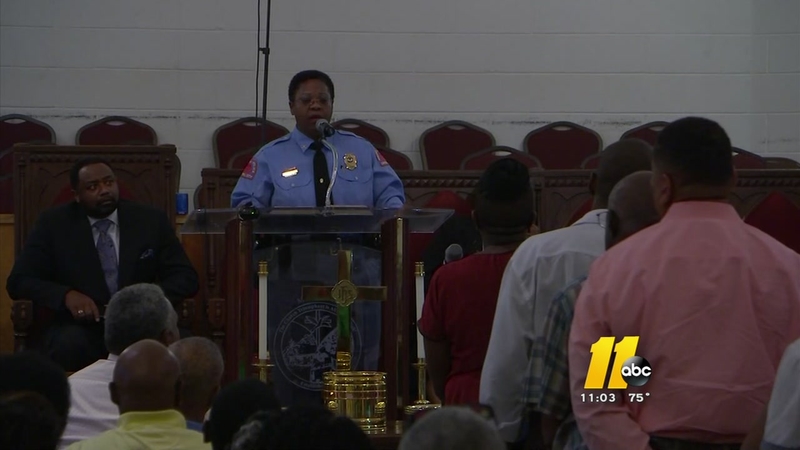 Hundreds of Raleigh residents filled the church and many took a turn at the microphone to ask Chief Cassandra Deck-Brown questions stemming from last week's deadly events. Those events are of course, the police-involved shootings in Baton Rouge and Minnesota and the attack on police in Dallas.

Chief Deck-Brown opened by showing a video made by the Raleigh Police Department, depicting how traffic stops should be conducted and the proper way for residents to respond during a stop.

The man in the video being pulled over in the video was black and told the officer he has a permit to carry a weapon and that he did in fact have a weapon. One woman in the crowd asked specifically what the difference was in that scene versus what happened with Philando Castille in Minnesota.

Mother at the mic about her 6-yr-old son - "I'd love to protect his innocence but it's getting harder & harder." pic.twitter.com/uenDDb2DPs

"I saw the same video you saw and I don't have an answer," said Chief Deck-Brown, talking about the Facebook Live video Castille's fiance took after Castille was shot.

Discussions lasted well into the night and ranged from what to do during traffic stops to what's being done to curb crime in black communities and among teenagers.

"I am willing, my officers, my staff we are willing to be part of the conversations and the actions," Deck-Brown said.

She also pointed to the outreach the department is already doing, such as fishing trips with children and the upcoming annual National Night Out. She also talked about the several "Face to Face" events she hosted where residents were invited to come talk to the chief one on one. She pointed out that despite being highly publicized, these events were poorly attended.

The conversation then turned to policing within the department and officers holding fellow officers accountable, to which the chief said already happens.

"We have far more complaints that are internal than external," Deck-Brown said.

This discussion was the last stop of the day for the chief, who spent the day at several events, opening herself to the community in hope of continuing to build bridges between the people and police.

There were other gatherings for peace Monday across the area, including one in Raleigh at Quarry Street Park, one at New Bethel Church in Rolesville, and a community forum at the United Church of Chapel Hill. Organizers called it "A Healing Discussion on Race and America" and said Chapel Hill's police chief and Carrboro's mayor would be among the participants.