Tips to prepare for a virtual job interview 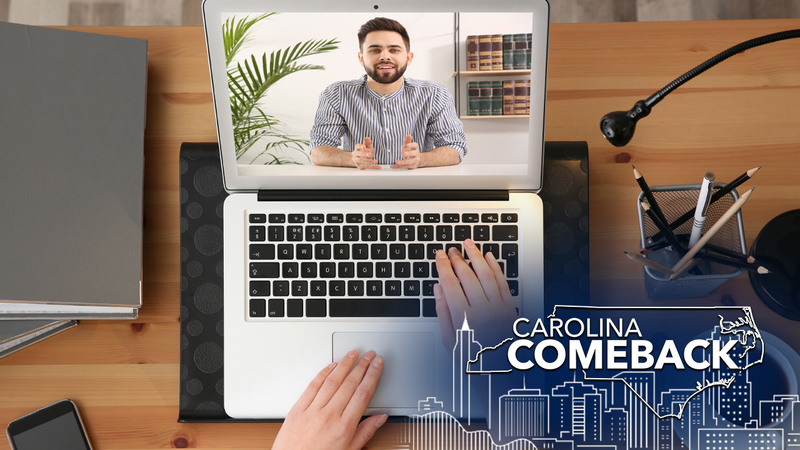 Tips to prepare for a virtual job interview

RALEIGH, N.C. (WTVD) -- With virtual job interviews becoming more standard practice, hiring and recruiting firms are sharing tips on how you can be best prepared.

Before beginning, you should test your internet connection and ask others in your home to avoid using streaming services during the interview.

During the interview, you should be in a quiet area of the house, preferably with the door closed to prevent any outside noise or people or animals from appearing behind you. The background should be non-distracting and orderly. It's also important to check the lighting and adjust the blinds to make sure your picture is not too overexposed or underexposed.

From an audio perspective, Zoom allows users to test their speakers when opening the app. And though the interviewer may only see you from the chest up, you should dress professionally from head to toe, in case you need to stand up at any point.

"In interviews, people typically get pretty nervous. Sometimes, some of the most easy questions that are asked, (people) will tend to blank out and just totally forget (the answer) even though it's something they do day-in and day-out. If you have to also contend with the dog barking or a (young child) trying to run in the door, it just adds that much more complexity," said Zack Ward, the Director of Software Development for Management Recruiters of Raleigh.

He suggested people use a computer with a web camera for interviews rather than a cell phone or iPad. He added interview from home also does come with advantages.

"You can have the company's web page open. you can have the job description open. I would definitely suggest whoever you're interviewing with LinkedIn page open," Ward said.

Ward said he believes people are likely more comfortable interviewing from their home, as it eliminates a lot of potential stress points.

"Walking into a strange building, getting lost on the way there, traffic, all those little things are what keep people up at night before an interview," Ward explained.

On that note, Ward stressed the importance of being set up and on-time for the interview.

"There's very little that should go wrong. And there's probably an expectation on the interviewer's part as well given the fact that we're allowing you to do this from home, certainly no excuse for being late," Ward said.

Though there are differences between in-person and virtual interviews, there's also plenty of crossover.

"Your posture matters of course. And again, not being slouched over," explained Pam Higdon, with Express Employment Professionals.

During the interview, it's important to remain engaged and maintain good eye contact.

"You want them to be in an environment where they can answer the questions you need to ask them and not be distracted by other things," Higdon said.

With the $600 weekly federal unemployment benefits now over, Higdon is anticipating an increase in interest from potential employees.

"We know without that, people are going to have to come back and get positions that are closer to the income before all of this started in March," Higdon said.

First impressions continue to be a major part of the hiring process. A survey from Career Builder from about 50% of employers knew with 5 minutes if an employee was a good fit for the position.

"When you are on an interview with a potential employer, you still only have that one chance to make that first impression. So really you want to make that impression a positive one," Higdon said.

Robert Half, which has multiple locations in the Triangle, shared this link with ABC11 to answer questions from job seekers.

Ranstad USA, which has a branch in Raleigh, shared these links about video and phone interviews.