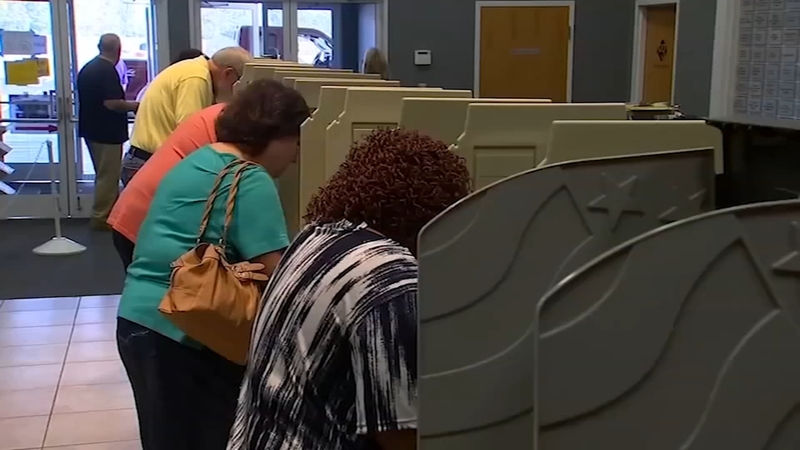 RALEIGH, N.C. (WTVD) -- A three-judge panel of the U.S. Court of Appeals for the Fourth Circuit unanimously reversed a lower-court decision to enjoin North Carolina's voter ID law and constitutional amendment on Wednesday.

Holding that "the district court's opinion devotes little analysis" to its ruling, the federal appeals court said that "we reverse because of the fundamental legal errors that permeate the opinion."

"Now that a federal appeals court has approved North Carolina's voter ID law and constitutional amendment, they must be implemented for the next election cycle in our state," House Speaker Tim Moore, R-Cleveland, said Wednesday.

Moore was a primary sponsor of North Carolina's voter ID constitutional amendment that was approved by voters in 2018.

In December 2019, U.S. District Judge Loretta Biggs ruled that the state could not implement the voter ID requirement and said it must stop any communications to the public that say a photo ID will be required for all 2020 elections.

"If the 2020 elections have taught us anything, it is the fact that voting in person with a photo ID is the best way to ensure the integrity of our elections," Moore said Wednesday.

In its decision the court acknowledged that "there is a long and shameful history of race-based voter suppression in North Carolina." But it also pointed out that acts of a past legislative body do not mean that current bodies are inherently not acting with good intentions.

"The outcome hinges on the answer to a simple question: How much does the past matter?" Circuit Judge Julius Richardson wrote in the opinion, citing a U.S. Supreme Court decision. "A legislature's past acts do not condemn the acts of a later legislature, which we must presume acts in good faith."

Trials are still expected before Biggs and in state court in 2021 in separate lawsuits challenging the law implementing a 2018 amendment to the state constitution that required the use of photo ID to vote in North Carolina elections. And a state appeals court ruling that blocked the ID requirement from being imposed remains in place.

Senate Leader Phil Berger, R-Rockingham, said Wednesday that "there's legitimate concern today about undermining trust in democracy. When an activist judge overturns the will of millions of North Carolinians who added a voter ID requirement to their own constitution, and rests her lawless opinion on political talking points and 'fundamental legal errors,' that's destabilizing. That is what erodes confidence in government. I'm heartened by the Fourth Circuit's unanimous decision in support of the basic principle of self-governance under the rule of law."

The ruling means North Carolina will rejoin the majority of states in having some form of a voter ID law. More than 30 states require some form of voter ID. Supporters of the photo ID mandate say it builds confidence in election results.

"The North Carolina Republican Party applauds this long-overdue ruling which not only reinstates common-sense election integrity protections but also upholds the rule of law," said NCGOP Press Secretary Tim Wigginton. "A majority of North Carolina voters and their elected representatives voted to adopt voter ID. This ruling reinforces the fundamental principle of representative government that the people make the law, not judges. The proper role of the judiciary is to interpret the law as written, not as they wish it should be. Now, Gov. Roy Cooper and his handpicked leadership at the North Carolina State Board of Elections must make sure North Carolina's voter ID law and constitutional amendment are fully implemented for the next election."

The state NAACP and its attorneys disagreed with the panel's ruling and said they will continue moving forward with legal action.

"NC NAACP is reviewing this decision and we are considering all appellate options. We steadfastly believe that the Honorable Judge Biggs's findings and determinations were correct at the preliminary injunction phase. Nonetheless, under the reasoning of the decision today, NC NAACP Plaintiffs' evidence will also prevail at trial on the full merits and we look forward to the fight for justice ahead," said Irv Joyner, NAACP attorney.