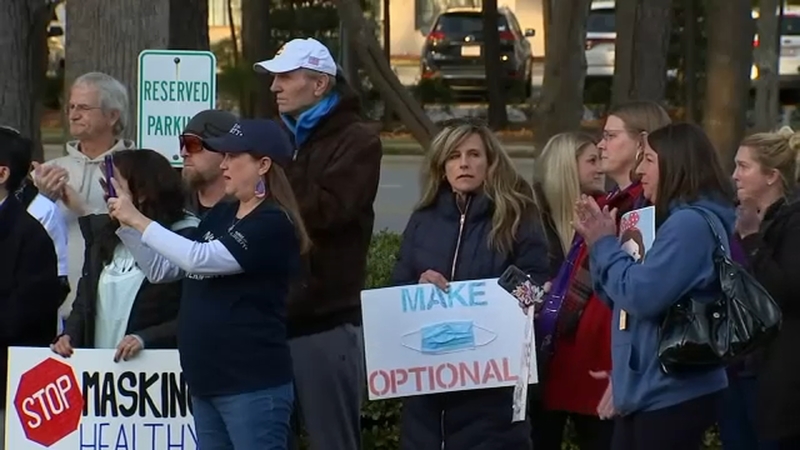 CARY, N.C. (WTVD) -- Some Wake County parents and activists rallied outside of the Wake County School Board meeting on Tuesday, urging members to change their mask policy, though a vote was not scheduled to take place.

"We're putting the pressure on," said Wake parent Jessica Lewis. "A lot of schools are going mask optional so Wake County needs to be next."

Johnston County students will be allowed to ditch them next Monday.

New Jersey is lifting its face-covering requirement next month.

Lewis has been fighting for a medical exemption for her second-grade son.

She says he has anxiety and suffers from a syndrome that'll cause him to become physically ill.

Lewis says her son once got sick in his mask and had to put it back on.

She said the masking is affecting his mental health.

"He said "I have to sit in the back of the classroom now,' and he feels singled out. This morning was a rough morning going to school for that reason," said Lewis. "I'm not anti-mask. I want mask optional."

She worries for her kindergartner and feels the policy stunts children's social and educational development.

"They have trouble learning letters and alphabets. My older son is 6. I can hardly understand him when he's masked. He says it's harder for him to understand his classmates and teachers when they're masked up," said Comer.

In North Carolina, school boards are required by law to vote on their masking policies every month.

There was a lengthy discussion among the Wake County School Board during the last vote. The policy stayed in place.