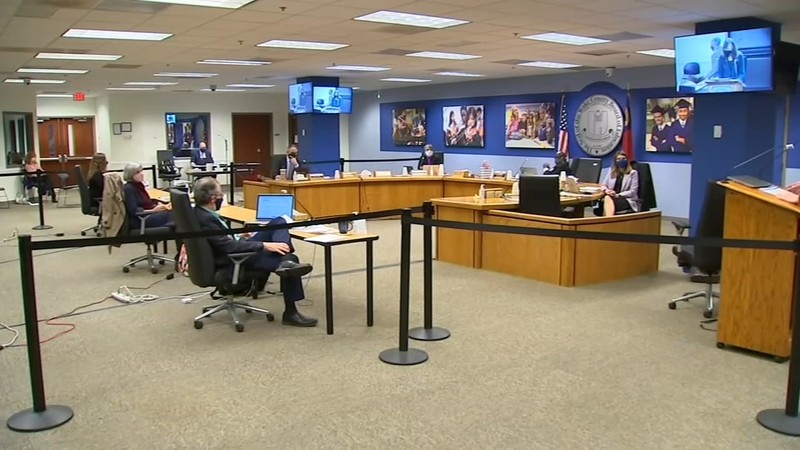 CARY, N.C. (WTVD) -- The Wake County Public School System board discussed options for students in sixth through 12th grades during Tuesday's work session and board meeting.

A district spokesperson said one option could be returning the students to Plan A -- full in-person learning. Currently, students in grades 6-12 are in the classroom in cohorts. They rotate with the cohorts and learn in person for one week at a time and virtually for two weeks at a time.

Staff recommendations are as follows:
All students return in Plan A on the following dates:


The district's discussion comes after last week's compromise legislation by Gov. Roy Cooper and Republican leaders to get more students back for daily, in-person instruction.

No vote is expected tonight but here are recommendations from @WCPSS for middle, high schoolers to return to the classroom daily.

Brian Groesser, who has three children who go to Wake County schools, started a petition online, asking for Plan A for all middle and high schoolers by April 7. At least 1,000 people have signed the petition since it was created one day ago.

"By looking at April 7, it allows for teachers who have been vaccinated or at least had the opportunity to be vaccinated, as of Feb. 23," Groesser said. "It allows for them a period of six to eight weeks almost to get their vaccine, right, and at least half, the first shot, if not have both shots, by that point, so the vaccine issue that had been raised, that is much alleviated if we are back by April 7, and it gives us three weeks to prepare. We're not asking to start tomorrow."

The Wake County Public School System board is expected to discuss options for students in sixth through 12th grades during Tuesday's work session and board meeting, which starts at 5:30 p.m.

Two of Groesser's children are in grades between 6 and 12. He also planned a rally to reopen schools near the state Capitol on Saturday.
"Enough is enough," Groesser said. "Get the schools open for these kids. Get it started April 7. That's the date. You know I'm not going to compromise on that one, April 7. We need them in for a full quarter of learning and I don't think that's that much to ask."

No vote is expected to be made Tuesday evening. Board members will vote on March 22.

At the meeting next Monday, Board members also will also consider small changes to school calendars to reschedule teacher workdays prior to the return of additional students to daily in-person learning.

Parents were fired up about Senate Bill 220 and the district's plans to return middle and high school students to full-time in-person learning after spring break.

"I am here to tell you the kids have had enough. They're ready. They need to get back," said a mother of a freshman Wake County student.

"Imagine what is like to start high school online in your bedroom," said one mother of four.

One father said his daughter is on the autism spectrum and learning from home was simply not working for her mental health, citing the lack of having a teacher helping with the material in person.

"In being autistic, that gave her anxiety because she didn't want to turn in answers that were wrong. So she just didn't do it," said Peter Bley, the father of an eighth grader.

Pages of comments from Wake County parents were submitted to the board ahead of Tuesday's meeting.

"You are failing these children by isolating them," said Jenna Burson in an online comment to WCPSS board members.

Another parent advocated for Plan B to stay in place.

"There needs to be some emphasis on COVID safety and distancing. The pandemic is not over," wrote Anne Bacon in an online comment to the board.