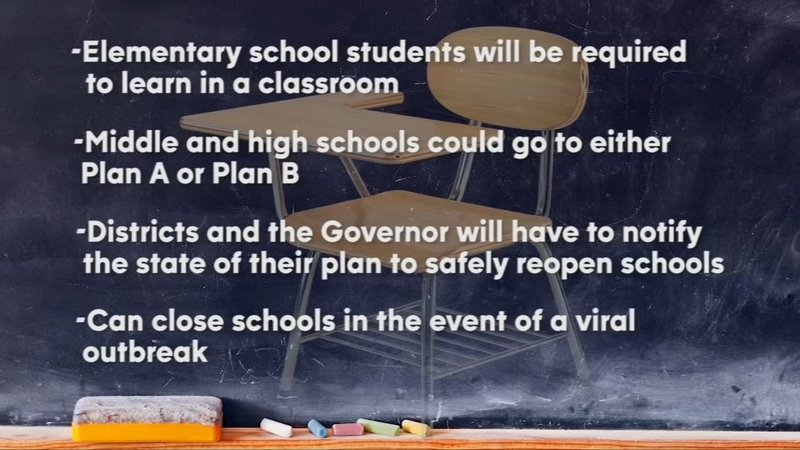 "Today the bill before you, tells schools when and how (to reopen). The good news is that we all want the same thing, to open our schools to in-person instruction for all students and to do it safely with important emergency protections," Gov. Roy Cooper said.

Cooper did clarify that elementary school parents would still be allowed to keep their children in virtual academies if they chose to do so.

"There is a full option for a parent to chose a virtual option for their children," Cooper said.

North Carolina Republicans and Democrats came together Wednesday morning to announce an agreement on reopening schools.

Middle and high schools can decide on a district-by-district basis if they will move to Plan A or Plan B (blended in-person and virtual learning).

Any middle school or high school that decides to move to Plan A must notify the North Carolina Department of Health and Human Services and describe their safety plan.

"The purpose here is to provide consultation but DHHS will not be able to veto the move," Berger said. "The Governor will be given the authority to order a closure, restriction or reduction of operations within schools but must do so on a district by district basis."

All local districts will also have the authority to close a school or classroom in the event of an outbreak.

This new agreement still has to make its way through the legislature, but all sides said today that they are in agreement and are fast-tracking its approval.

"Coming to agreement isn't always easy but it is the right thing to do for North Carolina," Cooper said.

The agreement will go into effect 21 days after Cooper signs it into law. His estimate was that it would become law around April 1.

"We can be an example to the rest of the nation on how you make government, especially democratic representative government, work so that it benefits all of the citizens of our state. So the state of NC can blaze the trail and show how we get things done," Blue said.

North Carolina Superintendent of Public Education Catherine Truitt said the bill was a "great example to our students of bipartisan efforts."

This bipartisan agreement comes after Republicans passed Senate Bill 37 in February. That bill was designed to force all school districts to at least offer in-person classes to all students in kindergarten through 12th-grade.

"I've heard countless stories from North Carolina parents about the hardships their families and children have faced as a result of remote learning, especially for students with physical and intellectual disabilities who need in-person schooling and services," Sen. Thom Tillis, R-NC, said in a statement. "I am glad that Governor Cooper, Speaker Moore, and Senator Berger were able to reach a bipartisan compromise to get students back to school safely and quickly. School reopenings in North Carolina and the rest of the nation must be based on what the scientists - not powerful unions - tell us, and I remain committed to pushing commonsense legislation to support our school districts as they put the well-being of students first by safely resuming in-person learning."

Cooper vetoed that bill on February 26. An attempt to override that veto failed on March 1.

The North Carolina Association of Educators released a statement reacting to the news.

"We agree with Governor Cooper and legislative leaders that North Carolina public school educators are eager to get back into their classrooms as soon as it is safe to do so. We thank all those educators who have been teaching, mentoring, and innovating, both virtually and in-person, under exceptionally difficult conditions since the start of this pandemic," said NCAE President Tamika Walker Kelly. "Educators also acknowledge that this pandemic has been equally challenging on students and parents, and all deserve to be lauded for their cooperation and partnership in the ongoing educational process. NCAE continues to stress the need for 6 feet of social distancing as recommended by the CDC in areas of high community spread to protect students and educators. This agreement between the governor and leaders in the state legislature will needlessly encourage school boards to push students, educators, and staff into school buildings that do not comply with CDC guidance during a pandemic, which has already claimed the lives of 11,000 North Carolinians."

Kelly added that: "It is deeply disturbing that the governor and legislative leaders failed to acknowledge the work that educators have been doing to keep students engaged and learning during the worst pandemic in a century while effectively absolving themselves of any further responsibility for the health and safety of our public schools and those who learn and work in them. If the social and emotional needs of students is as important a priority to legislative leaders as their comments suggested today, we are looking forward to the immediate reversal of the decade of declining funding for school counselors, social workers, psychologists, nurses, and teacher assistants. Anything less would lay bare the partisan hypocrisy of justifying a politically expedient return in-person instruction with the emotional needs of our own students."
Report a correction or typo
Related topics:
educationraleighback to schoolcoronaviruspoliticsroy cooperreopening nc
Copyright © 2022 WTVD-TV. All Rights Reserved.
TOP STORIES
Icy roads possible; windy and cold Monday
LATEST: Some COVID-19 testing centers open on delay
Dozens of RDU flights canceled through Monday evening
Monday events canceled, postponed due to winter weather
Betty White Challenge has fans donating to animal charities
Celebrated Tuskegee Airman Charles McGee dies at 102
Catch first full moon of 2022 Monday night
Show More
Expect more worrisome COVID variants after omicron, scientists say
NCSHP reports 200 crashes statewide, urges drivers to stay home
FBI identifies hostage-taker at Texas synagogue
After Biden's first year, the virus and disunity rage on
Novak Djokovic leaves Australia after court rejects visa challenge
More TOP STORIES News