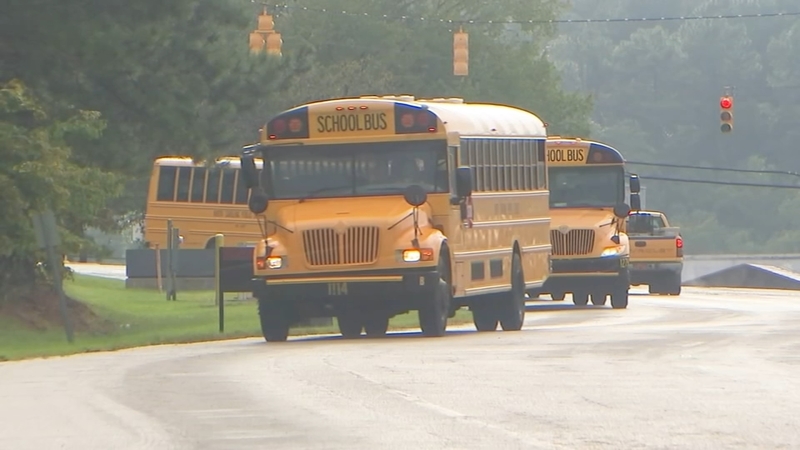 A district spokesperson said more than half of its routes are shared runs. That means one bus gets a group of students in the morning, drops them off, then goes back out to get another group of students. It happens again in the afternoon, in reverse order.

Bobby Newell has two children who go to Panther Creek High School. She said they had to wait for the bus outside the school for more than an hour in the heat Monday, on the first day of school.

She said that because of the driver shortage, the bus did a double route and that caused the delay.

"They've never had to wait that long before after school to get the bus, and it seems like a real safety issue when it's so hot outside," Newell said.

ABC11 reached out to the district about Newell's concerns.

A district spokesperson said that Panther Creek bus riders did wait outside Monday because it was the school's first experience with the new shared routes, and staffers did not know how long it would take for the bus to return. The spokesperson said bus riders were able to wait inside Tuesday.

Renee Sekel has three children in Wake County schools. Her son's bus got home an hour and a half after school ended Monday. One of her daughter's buses didn't arrive at all Tuesday morning and Sekel ended up driving her.

"It's always kind of a mess the first week of school as kids learn their buses and the bus routes shake out," Sekel said. "So you always expect that there will be delays and chaos in that first week of school, and then everything starts to settle down a little bit, so you'll know roughly when your kid is going to get home and know to expect them at a certain time every day, even if it's maybe a little bit later than you wish they would be coming home."

Sekel was able to keep track of her son's bus on the Here Comes the Bus app.

The district spokesperson said Tuesday morning that bus routes went much better, with riders showing familiarity with bus stops, and less traffic at most schools, allowing buses to get on and off campus in a more timely fashion. The spokesperson said they expect things to keep improving.

There are about 100 fewer bus drivers than in previous years, the spokesperson said, and the district is offering a $1,200 signing bonus for new bus drivers. The district is asking for patience from parents.

Meanwhile, some parents have reported difficulties with virtual learning to ABC11.

Wake County middle school student Anika Kumar had difficulties logging onto some of her Virtual Academy classes Monday and part of Tuesday.

"It was pretty frustrating," Anika said.

The district sent ABC11 a statement saying, "as with any virtual learning environment, glitches in access during the first week or so are to be expected. We are working through these issues."

Her mom, Madhu, started an online petition asking the district to allow more students into the Virtual Academy. More than 2,100 people have signed it.

Kumar also has a son who goes to another school in the district for in-person instruction. She said his request to attend the Virtual Academy was denied.

Enrollment into the district's Virtual Academy is closed, with about 10,700 students.

There are 130 teacher vacancies in the Wake County Public School System's Virtual Academy.

The district is hoping a separate company can help fill these vacancies, with officials reviewing bids from businesses that would supply virtual teachers.

A district spokesperson previously told ABC11 that the district is continuing to recruit in traditional ways and broadening strategies, sending this statement: