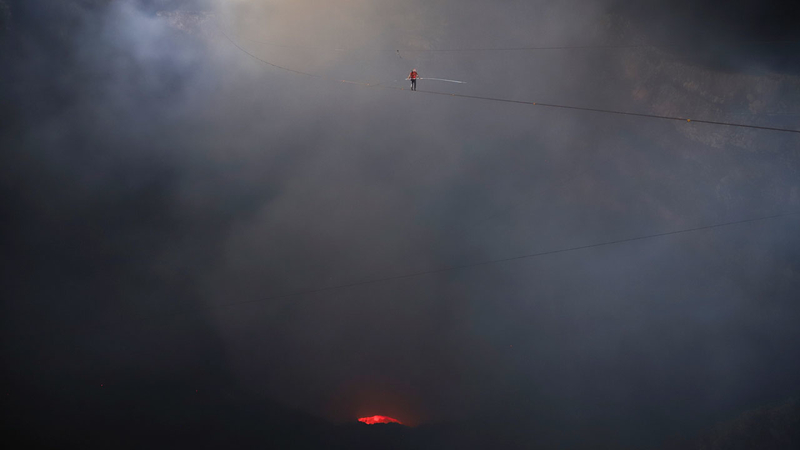 The stunt was Wallenda's "longest and highest highwire walk ever attempted," according to ABC, which aired "Volcano Live with Nik Wallenda" as a live two-hour special.

After the walk, which took more than 30 minutes, Wallenda said he was relieved and joked that he "may actually sleep tonight."

"It was amazing...just being able to see that volcanic lava down there was absolutely mesmerizing," he said. "It's unexplainable."


In addition to a safety harness, Wallenda wore a gas mask during the walk to protect from dangerous haze over the volcano that he said caused his eyes to burn. He also had to battle the wind, which he said was worse than during his televised walk over the Grand Canyon.

"They were unpredictable," Wallenda said of the winds. "There was a time when I was taking a step and I felt like I got knocked back."

Despite the obstacles presented by Mother Nature, Wallenda said the walk was "everything that I expected" and had prepared for. In an interview before the show, Wallenda said he had practiced blindfolded at his home in Florida to simulate the conditions over the volcano.

As he has during previous walks, Wallenda offered words of encouragement to the viewing audience during the stunt: "There haven't been many steps that haven't had fear in them. But let me tell you, you have to take that first step in order to fulfill your dreams...It's that battlefield of the mind. We choose what we allow in our minds and what we allow out. That's the key to my success: Getting rid of the negative and focusing on the positive."

Nik Wallenda is putting nothing between himself and an active volcano except a 1-inch wire.

His wife, aerialist Erendira Wallenda, opened the show with her own performance suspended over the volcano. She was supposed to perform her aerial ballet suspended from a helicopter but plans changed at the last minute due to safety concerns related to the windy conditions and she performed suspended from the wire her husband later walked.

At the climax of her performance, Erendira Wallenda, who also wore a safety harness, hung over the volcano from her teeth.

"It was beautiful and breathtaking," Erendira Wallenda said of performing over the volcano.

Mike Troffer, Wallenda's uncle, was the lead engineer and has been preparing six months for this event. His job was to guide a team of riggers to make sure that the main wire, just over an inch thick, and the 116 stabilizing wires stayed secure.

The conditions made it impossible to erect the tightrope in advance.

"The cables can't go up early because the sulfuric gases in the air will actually eat through the cable to the point where it will actually crumble," Wallenda told the Associated Press before the show. "We can't put it up in advance. It's got to be put up in a very short window prior to the actual walk."

Wallenda is a seventh-generation acrobat and comes from a family of star tightrope-walkers.

For his last major stunt, his walk on live television over New York's Times Square, Wallenda was tethered in case of a fall. But that was more about a New York City ordinance than caring for his own safety.

Wallenda said as crazy as it may seem, he was born to do this.

"I live by the words 'never give up' ... When I get on this wire, I'm taking a journey, I believe that everyone has a journey in life, and they're all on a wire trying to get to the other side," he said.

"This is unlike any walk he's ever had, and there is this misconception that this is a foregone conclusion, that all this is just going to go great. There are 100 things that could go wrong here, this toxic, you know, dust and fumes that come up, that choke you out in seconds ... There are a lot of unknowns, and he's anxious about this particular walk," Harrison said ahead of the show.