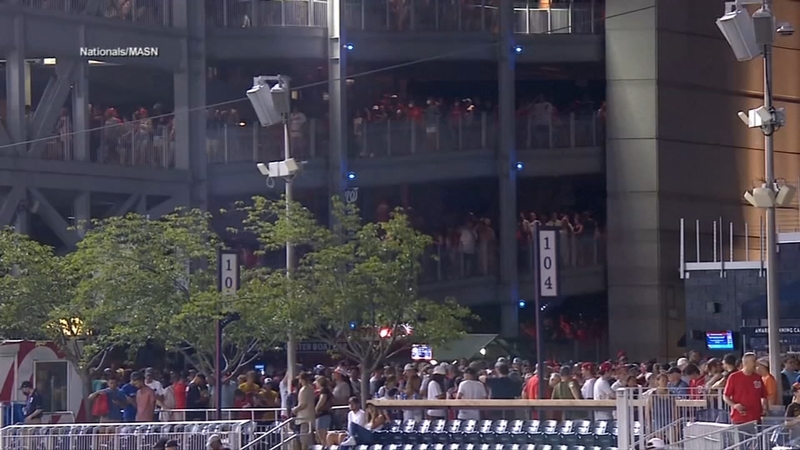 A fan outside of the stadium was one of three people wounded, according to Ashan Benedict, executive assistant chief of police for DC's Metropolitan Police Department.

CNN journalists inside the stadium reported hearing multiple loud bangs during the bottom of the 6th inning in a game between the Washington Nationals and San Diego Padres.

Fans fled their seats and sought shelter after hearing the gunfire. Benedict said there ultimately was no threat to people inside the stadium.

"I just want to assure the public that at no time during this incident were individuals inside the stadium attending the game in any kind of danger. This was not an active shooter incident and it's not being investigated as such. Everything took place outside the stadium," he said.

Benedict told reporters that two vehicles were involved in a "shootout" on a street outside of the stadium during the game. Police recovered one of the vehicles but the other remains at-large.

The two other people wounded in the shooting were associated with the recovered vehicle and are now in the hospital being questioned by police, according to Benedict. It's unclear what their exact involvement was in the incident. Benedict also said those individuals were known to law enforcement.

The suspect vehicle that detectives from the Metropolitan Police Department's First District are searching for is described as a gray Toyota Corolla with a missing hubcap on the rear driver's side wheel and dark tinted windows. The vehicle is believed to be displaying a Virginia temporary tag, according to police. Anyone who can identify the vehicle or who has knowledge of the incident should call police at 207-727-9099 or text the department's text tip line at 50411. The department is offering up to a $10,000 reward to anyone who can provide information that leads to the arrest and conviction of the person or persons responsible, according to police.

MPD seeks assistance in identifying and locating a vehicle connected to the shooting that occurred last night outside of Nationals Park.

The fan who was shot, a woman, is expected to recover, Benedict said. Police initially said in statements posted on Twitter that four people were shot.

The Washington Nationals had fans shelter-in-place inside the stadium during the immediate aftermath of the gunfire, according to Scott Fear, vice president for public safety and security for the Washington Nationals. A message on the scoreboard shortly after the shooting told fans to remain inside the baseball park, but it was later updated to say it was safe for fans to leave the stadium.

A shooting has been reported outside of the Third Base Gate at Nationals Park.

Fans are encouraged to exit the ballpark via the CF and RF gates at this time.

We're working with law enforcement to provide more information as soon as it becomes available.

"We held shelter in place for approximately 10 to 15 minutes. At that time we said fans were allowed, not that they had to, but they were allowed to exit through Center Field Gates and Right Field Gates on the other side of the stadium, because MPD had let me know that it was safe enough that they could go outside, out of the gate that way," said Fear.

The remainder of the game was suspended until Sunday afternoon, the Nationals said on Twitter.

Tonight's game has been suspended due to an incident surrounding Nationals Park.

"The suspended game will resume beginning at 1:05 PM ET and be completed as a nine-inning regulation game," the team said.

Game 3 of the Nationals-Padres series that was originally scheduled to begin at the same time Sunday but will instead be played at the conclusion of the suspended game, the team said.

San Diego Padres star Fernando Tatis Jr. posted on Twitter his appreciation for those who responded to the shooting.

Hope everyone is safe! Just keep the prayers up🙏🏾 thank you everyone that help in the front line ! God bless 🙏🏾

"Hope everyone is safe! Just keep the prayers up thank you everyone that help in the front line! God bless," he said.