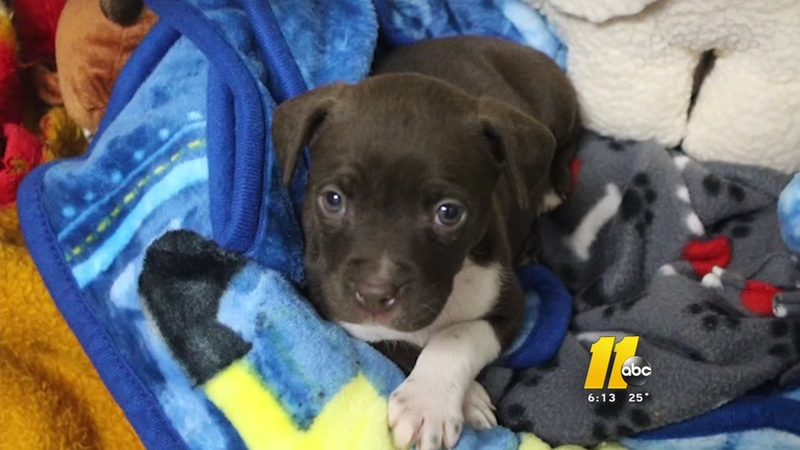 WAKE COUNTY (WTVD) -- It's not known the life Donut has led since she left her mother's womb some 35 days ago. But on Friday, she nearly met the end of it when someone abandoned her near the loading docks of the SPCA of Wake County shelter in below freezing temperatures, some two hours after the facility closed.

A spokesperson for SPCA of Wake County said it's not likely she would have survived the night alone in the frigid air.

Though Donuts Friday night started down the wrong path, a light would emerge: a worker took notice of her tiny, shaking, and undoubtedly frightened body.

"She walked out and just saw this little tiny puppy curled up in a little tiny ball and shivering," said Tara Lynn with the SPCA of a Wake County. "She scooped her up and ran inside."

The shelter worker along with others scoured the area searching for littermates to no avail. Donut was alone.

The person who found Donut is now contemplating keeping the seemingly healthy pup.

This tiny pup was abandoned outside of the @SPCAwake steps Friday night in below freezing temperatures... her story tonight on @ABC11_WTVD #abc11 pic.twitter.com/9N9tQX9wJ9

Donut is a lucky one, other furry friends living outside during this cold snap across the country do not share her same fate.

Last week in Ohio, reports of a dog left outside frozen to death, found wrapped in a ball outside of her home.

Lynn said that the shelter may never know how or why Donut was left.

"There are many reasons that someone can't keep their pets," Lynn said. "And there are also many ways that people can responsibly find a new home for them... leaving a puppy abandoned in freezing temperatures is not the right way."

Lynn said a general rule of thumb is if it's too hot outside or too cold for you, it is for your dog as well. Even so, if your animal must remain outside, it's best to have hay or straw for the animal to sleep on.