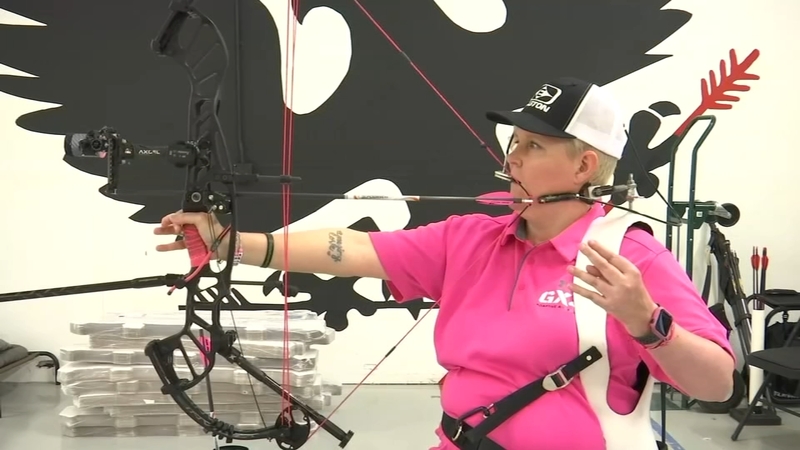 WILSON, N.C. (WTVD) -- A Wilson woman isn't letting her physical differences keep her out of the game -- after 20 years of thinking sports weren't an option, she finally found one she loves and is hoping to inspire others to do the same.

Two decades ago, what should have been the most exciting days of Wendy Gardner's life became the most frightening.

"I had no feeling, couldn't move," she said. "I'm in the hospital, I have a newborn child that I can't take care of. I can't even see. My head hurts so bad that my [husband] cried a lot, and he couldn't even be around me because it just made it worse."

"I was at a loss," her husband Gary said. "We had a 10-day old child. I didn't know if she was going to live. The doctors told us she probably wasn't going to live the helicopter flight to Chapel Hill."

After the birth of their first child, Wendy had a hemorrhagic stroke and was paralyzed on the left side, leaving her and Gary in disbelief.

"Totally depressed, you go from completely able-bodied to I couldn't do anything by myself," Wendy said.

Gary wasn't optimistic but tried to make the best of it.

"I didn't foresee any normalcy coming out of this," he said. "I saw a lot of people in the hospital when we were there that were way worse off than what she thought she was, and it gave me a whole new perspective out of life that you deal with what you've been given and make the best of it."

After a lot of physical and occupational therapies, Wendy eventually regained some feeling, but she had to give up things she loved such as running, playing sports and even video games. That changed in 2019 when they took a family trip to watch the Vegas Shoot -- the largest and most prestigious indoor archery tournament in the world.

"We saw Matt Stutzman," Wendy said. "He's the armless archer, he shoots with his feet. I thought if he can do it, well I can do it with the use of one arm surely."

After doing some research, they found a way to make it work. Gary made Wendy a brace to help her shoot; she sits on a stool for balance and uses a bite-piece to make the bow release.

"I was like, now there's finally something that I can participate in and with other people, a lot of people are in wheelchairs," Wendy said. "There are people with vision impairments. It's something everybody can do."

Gary is impressed with her performance.

"It's amazing the things she can do with one hand," he said. "You don't know what you can do until you're put into that situation and you adapt and overcome."

Wendy will be competing this year in Arizona, Florida and California, and her goal is to make the US Paralympic archery team.