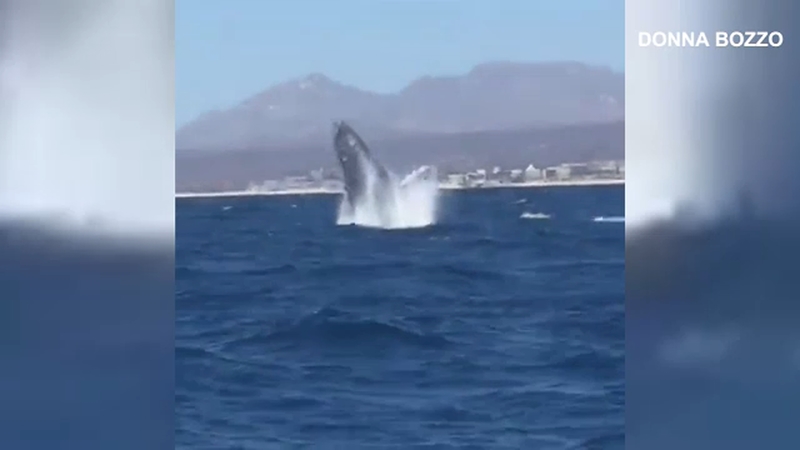 CABO SAN LUCAS, Mexico -- Imagine a 40-ton humpback whale as it leaps out of the ocean.

"It was magical, just so amazing, to catch a glimpse of nature in its natural habitat. We were honored visitors," said Donna Bozzo, of Winnetka, Illinois.

Bozzo, who is also an ABC 7 Chicago contributor, snapped video of a humpback whale breaching in and out of the water while vacationing in Los Cabos on Monday.

"I didn't have high expectations of actually seeing a humpback whale when we set out, and was just hoping to spot a sea lion or two," Bozzo said.

This is the last week of the humpback whale migration season. The whales travel up to 3,000 miles to the waters of Cabo San Lucas from their feeding grounds in the cold waters of the polar regions like British Columbia, Alaska and eastern Russia.

According to the Pelagic Safari, the company that organized Bozzo's whale-watching tour in Los Cabos, the whales come down to mate and have their young in the Sea of Cortez. They eventually return back up north to feed.

These gentle giants break through the surface of the ocean as a way of communicating with other whales. Below the surface, they are said to produce a wide range of fascinating singing sounds.

Bozzo said she also saw a calf with its mom breaching in and out of the water in unison. A male companion was right behind them, protecting.