What's behind Trump's striking reversal on the coronavirus timeline? 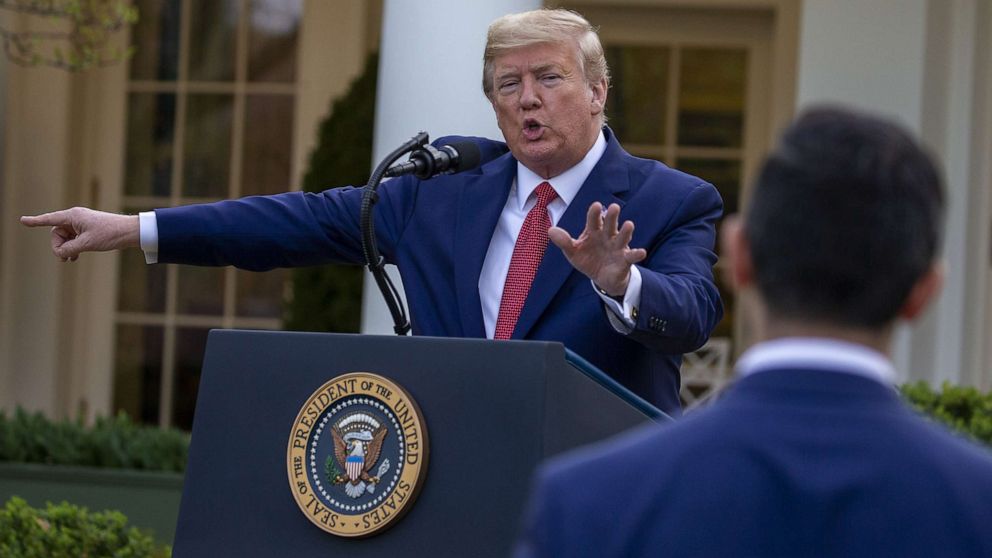 President Donald Trump on Monday optimistically declared that "it's going to be a month of achievement" for the country even as he asked the extended strict social distancing guidelines for another month as the nation stares down the sober reality that 100-200 thousand Americans could die from the virus.

"Nothing would be worse than declaring victory before the victory is won. That would be the greatest loss of all," Trump told reporters Sunday in the Rose Garden.

The president's decision amounted to a striking reversal from his rosy projection last week that parts of the country could be allowed to "reopen" by Easter Day on April 12. His shift was accompanied by a figurative sigh of relief from the nation's top public health experts who had warned of the potential for the death toll to soar if restrictions were loosened too soon.

Dr. Anthony Fauci, the nation's foremost infectious disease expert, said the president's decision came about after he had "intensive conversations" with members of the coronavirus task force.

"None of us felt that 15 days was adequate," said Fauci, who told Stephanopolous that data factored heavily into the president's decision to extend the federal recommendations: "The thing we're pretty sure of, is that if we prematurely did it, it would likely rebound, and that's one thing you did not want to happen."

The president acknowledged he "thought about" the possibility of "rid[ing] it like a cowboy" and not taking further mitigation steps but that he was informed that up to 2.2 million could die if no steps were taken to slow the virus' spread, according to projections.

"That's not acceptable," Trump said of the projected worst case scenario of 2.2 million deaths with inaction. "But there were a lot of people that said -- I thought about it. I said, 'Maybe we should ride it through'."

While some in the president's inner circle had made an economic-based argument that the president should dramatically loosen the guidelines on a faster timeline, and there was an active debate on the issue within the ranks of the task force last week, a White House official familiar with the deliberations said the president ultimately leaned heavily on the recommendations of his top medical experts -- Dr. Fauci and coronavirus task force coordinator Dr. Deborah Birx -- along with Vice President Pence in making his final decision.

"I think the president's done the right thing listening to medical professionals, that we're going to wait a little bit longer to make sure that we -- we kill this virus. And we are prepared. We have a lot of money, as you know, over $2 trillion to put to work, plus we can lever another $4 trillion with the Federal Reserve," Mnuchin said in an interview with Fox Business Monday morning.

In extending the guidance to the end of April, President Trump expressed optimism that by that time the country will be on solid-footing in efforts to stamp out the virus.

"We can expect that, by June 1st, we will be well on our way to recovery. We think, by June 1st, a lot of great things will be happening," Trump predicted.

But he also acknowledged that there is a scenario under which the guidelines could be extended.

"I'll use my head and I'll make a decision, but I rely on experts. I do that. Anthony [Fauci] and Deborah [Birx] have been doing this for many years, and I'm going to rely on them," Trump said.

Dr. Fauci echoed the president that the task force doesn't think they will need to extend the guidelines beyond April but qualified that "there's always that possibility depending upon the efficiency and the effectiveness of the mitigation methods."

"April might do it... but we kept an open mind," Fauci said.

What to know about coronavirus: