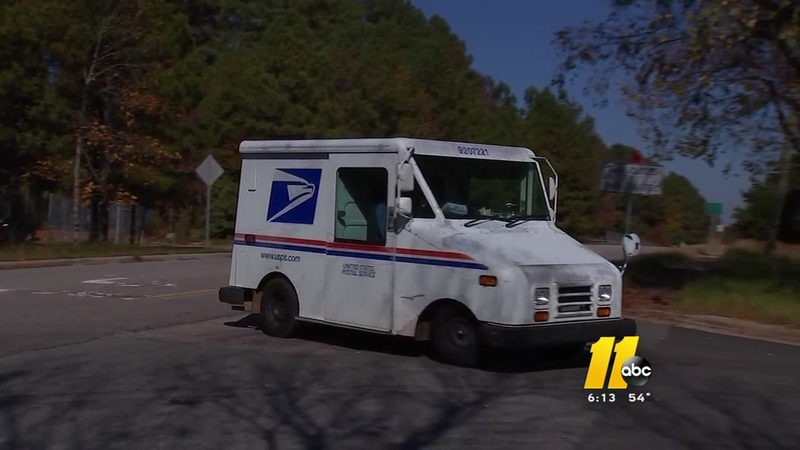 Complaints pour in to ABC11 about mail delivery

RALEIGH (WTVD) -- Shortly after ABC11 aired a story Wednesday regarding mail delivery issues in the Waverly Point subdivision, dozens of North Carolinians contacted the station to share their displeasure with the United States Postal Service.

Waverly Point residents said their mail has been consistently delivered as late as 3 a.m., to the wrong address, damaged, showing as delivered but not received, or in some cases, not at all.

Emails poured in from Raleigh, Pittsboro, Hope Mills, Durham, Cary, Wake Forest, Mebane, Apex, parts of Johnston County and even from Carteret County on the coast. One by one, the emails highlighted problems with the USPS; similar to what Waverly Point residents were experiencing.

Jaime Hoffman, who moved to North Carolina 12 years ago, is having issues with mail delivery as well.

"I think probably more than anything, it's just accountability," Hoffman said. "I would say the USPS needs to be accountable to someone besides themselves. And if nobody is taking an active role to say, 'Hey why are you doing this? Why is it being done wrong?' then they would have no reason to change or improve because nobody is going to chastise them for not doing it right."

AHEAD @ 6: USPS, Capitol Hill respond to allegations of why mail is being delivered late, not at all, and in some cases, damaged. #ABC11 pic.twitter.com/3FnS6ErTRz

After further investigation, ABC11 has concluded the issues were not limited to Waverly Point. In fact, per the office of Congressman Mark Walker (NC-06), USPS as a whole has a 'mismanagement' issue.

Walker serves on the House Oversight and Government Reform Committee and is a co-sponsor of the Postal Service Reform Act of 2016. With budgetary and infrastructure problems plaguing USPS in recent years, Walker hopes the PSRA fixes many issues.

ABC11 contacted Walker's office and was given the following response (partial):

"The bill is currently in the Ways and Means Committee. With the limited amount of time in this Congress and the priorities of Chairman Brady, this legislation will not likely make it to the floor this year. So, we'll have to likely wait till next Congress for a reform package. The current legislation in this Congress will not specifically address North Carolina's wrongful delivery problem, but there is overall mismanagement at USPS. The hope is that overall postal reform will fix this mismanagement and correct further problems down the postal pipeline."

After being told about the mismanagement issues, Hoffman agrees the Postal Service needs to do better.

She's one of many who have contacted Postal Service officials and have not had luck in the matter being resolved.

USPS Corporate issued a response on Wednesday to ABC11 that read:

"The Postal Service strives to deliver mail safely, timely and in the best possible condition. Due to mail volume increases during the fall and over the Veterans Day holiday, some mail was delivered later than normal. We have addressed issues related to mail volume increases. We apologize for any inconvenience and encourage customers with questions about mail service to call us at 336-668-1307."

ABC11 pressed for a more detailed statement later that evening that more specifically responds to the dozens of emails received. On Thursday, we received the following response:

"The Postal Service's goal is to deliver high-quality customer service. We apologize to customers who have not received the level of service they expect. We have already taken steps to address issues related to mail deliveries, and we are committed to continually evaluating our operations with the goal of always improving customer service. Customers who have questions about mail delivery are encouraged to call the Postal Service at (336) 668-1307."

Cumberland County USPS mail carrier Kylah Durant agrees the Postal Service needs improvement. In a phone call with ABC11, Durant said, "The entire management structure of the Postal Service does need to be evaluated and looked at what can be done differently from the top to the bottom."

Durant said managers ought to do better with how they deal with customers because it makes her job as a mail carrier more stressful.

"I do hear managers say to people sometimes, 'OK, we're working on it,' and they expect that to be the end of the conversation," Durant said. "Give these people a little bit more comfort in knowing that this is something we're actually working very hard on."

Durant says it is likely mail service became worse during the summer because of political campaign mailers being added to the mix. Shortly after the summer ended, Hurricane Matthew hit, which affected a processing plant in Fayetteville. According to Durant, this inconvenience forced USPS to divert mail to Charlotte instead, which created challenges for the Postal Service.

"I don't want people to feel like we're making excuses to why things are the way they are," she told ABC11. "It's not an excuse, it's just facts. It's the way that it is right now."

Durant said she believes once the Christmas season is complete, the Postal Service will return to delivering mail in a timely manner. "With the political mail rolling, and then (Hurricane Matthew) hitting, and the plant being messed up, it was just a lot that impacted us all at one time."

ABC11 also reached out to the USPS Office of Inspector General with regard to allegations of mail theft and abuse by employees or contractors in the Triangle. The USPSOIG says there are not any ongoing investigations.

An attempt was made to contact the United States Postal Inspection Service, however, our attempt was unsuccessful.

If you have a complaint you wish to file with USPIS, you can do so here

If you have a complaint you wish to file with USPSOIG, you can do so here