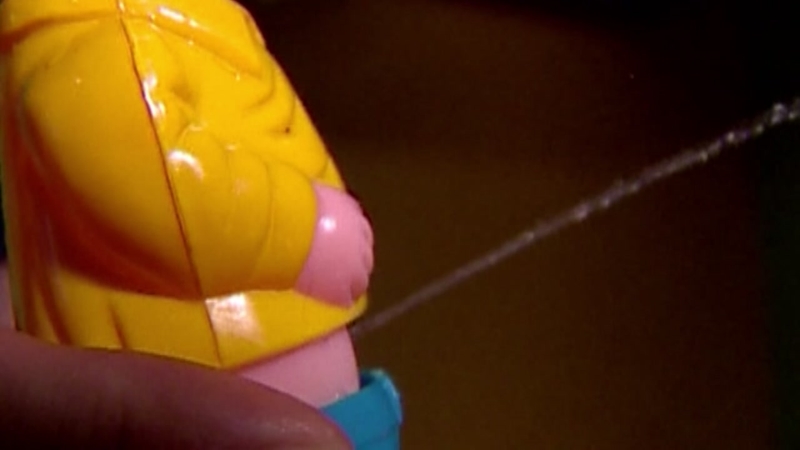 That's what a Texas woman told police after a bizarre incident at a hibachi restaurant in Murfressboro, Tennessee. The woman, Isabelle Lassiter, claims she was sexually assaulted when she was squirted with water by a toy at the restaurant. If you've ever been to a hibachi restaurant, chances are you've seen the toy in question: It looks like a boy who drops his pants and squirts water.

The chef at Wasabi Japanese Steakhouse said along with dinner, patrons also get a show. However, Lassiter and her husband told News Channel 5 the cooks showed a little too much.

"You hold it aside... and (spray) and water comes out," said Wasabi General Manager, Johnny Huang while demonstrating how the toy works.

According to the incident report, the Lassiters went out to dinner with their children and one of the Wasabi chefs admits the toy squirted water in Isabelle Lassiter's face.

"It peed on me...basically, out of his... wee wee area" said Lassiter.

The Lassiters who are originally from Texas were in Tennessee for work and the couple said they were mortified.

"It really didn't have a wiener, but you got the point," said Lassiter.

The Lassiters were so upset, they called the police citing assault.

"It was a sexual style assault on my wife," said James Lassiter.

When officers arrived at the restaurant, they noted the toy wasn't anatomically correct. The officer wrote, "I observed the toy to have no penis and just a hole for the water to shoot out."

However, the Lassiters claim that does not matter.

"Just because somebody cut off a piece of plastic okay its not there anymore...doesn't change the fact that you're getting peed on," said James Lassiter.

The manager of Wasabi did issue an apology to the couple, but claims he has never had any complaints about the toy in the past.

"The kids like it, they think its a water gun, kind of like a water gun you know," said Huang.