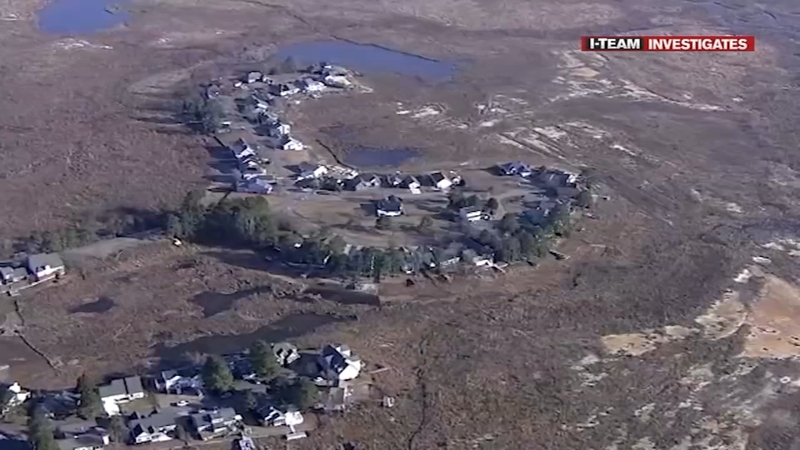 VASS, N.C. (WTVD) -- The floodgates may soon open for the success of a once-maligned corner of Moore County.

"The previous owner really gave this place a bad name," Charlie Jones, a resident in the Woodlake development near Vass, told ABC11. "This has been the focus of a good percent of our time trying to fix this problem, and it was a fixable problem, and now it has a good chance of being fixed."

The problem, of course, was the Woodlake Dam, which nearly breached during Hurricane Matthew and was mired in years of mismanagement and neglect.

More than five years after the storm, however, the dam and development's new owner Keith Allison is changing the narrative with his own investments of time and money: he's already begun restoring golf courses and parks, and he's successfully lobbied state lawmakers to include $9.6 million in the state budget to restore the dam.

"It's good for everybody. There are no losers here," Allison told ABC11. "There's flood mitigation, there's economic development, there's more tax revenue coming into the counties."

An ABC11 I-Team investigation confirmed that history of negligence on the part of the past and current owners and a failure on the part of the NC Department of Environmental Quality to enforce the many Dam Safety Orders and notices delivered during the last decade.

Downstream, meanwhile, the lack of a dam meant no flood mitigation during Hurricane Florence, when the deluge of rainfall led to historic flooding in nearby Spring Lake.

"They're our neighbors," Jones said. "It turned into water in, water out. Whatever fell, accumulated, it just got pushed right downstream. It impacted a lot of homes, 690, Spring Lake, and parts of Fort Bragg."

Allison assumed control through Woodlake's foreclosure last year, and has promised tens of millions of dollars in investment to the Sandhills, which he added should play an integral part of North Carolina's pursuit of big employers such as Apple and Toyota.

"The Sandhills community is only really 45 minutes away from these new projects that are going on in the outliers in the Raleigh communities," Allison said. "Pinehurst, as well, the US Open will make this a regular stop."

Though Allison was instrumental in lobbying lawmakers on Woodlake's behalf, residents like Jones also put up cash to retain an engineering firm that offered designs and cost estimates on the dam, thus giving lawmakers something more tangible to work with.

Still, there may be challenges in that the $9.6 million estimate did not account for the historic inflation affecting prices on both materials and labor.

"Construction, in general, has gone up 20-30%," Allison said. "Hopefully that will recede some and we'll still be on our timeline."

According to Allison, it will take a year to gain the proper permits from state regulators then bid out contracts for the dam. It will then take another year for construction.

"It's not something I've done lately, which is build a dam," he said. "Our staff is working hard on it. I'll say that."

Despite the potential for good news now, the saga is also a warning to communities across North Carolina: Woodlake is one of more than 2,200 privately-owned and maintained dams in North Carolina (there are more than 6,000 total). Some dams are much larger than others, but they all hold a significant amount of water and could pose significant dangers if they were to ever give way.

In fact, there are 1,483 dams considered by the State of North Carolina as "High Hazard," meaning there are roads, infrastructure or buildings located downstream or in proximity to the dam that would be adversely affected or could cause loss of life if the dam fails.
Report a correction or typo
Related topics:
vassmoore countyncbusinessreal estate developmenthousinghurricane matthewi teamdevelopmentstorm damage
Copyright © 2022 WTVD-TV. All Rights Reserved.
I-TEAM
Fayetteville PD on track to full staffing; what about Durham, Raleigh?
Wake County reports highest rate of COVID-19 cases per capita in NC
Shortage of mental health professionals persists as need grows
Durham County Sheriff reveals cross-county 'Strike Team'
TOP STORIES
LIVE: Tornado warning expires, severe storms remain
Homeless veterans get an assist from Durham's Rotary Club
Truck slams into NC woman's new home
Shelf cloud seen in Raleigh ahead of line of storms
New NC flood monitoring system ready for next big storm
Father puts 1,000 miles on his car to find specialty formula
Student says he was told not to mention 'Don't Say Gay' law in speech
Show More
Clayton police arrest man in shooting that injured 1
More than 75,000 pounds of baby formula lands in US amid shortage
Report: Top Southern Baptists stonewalled sex abuse victims
Arby's is selling a fast-food staple it's never offered before
Biden: US would intervene with military to defend Taiwan
More TOP STORIES News