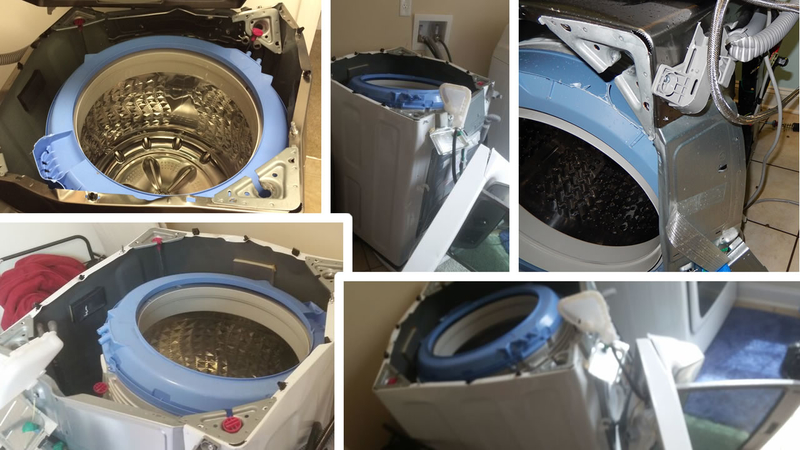 HOLLY SPRINGS, NC (WTVD) -- Doing a load of laundry typically doesn't cause any safety concerns, but a Holly Springs mom is speaking out after she says her washing machine exploded.

"I heard a loud commotion and it kind of sounded like one of these shelves were falling down," Sarah Price said.

But it wasn't falling shelves; it was a falling washing machine.

"It was across the room on its side and there was water out on the floor," she said.

Price didn't understand what happened; her 2-month-old Samsung Active Wash was scattered all over her laundry room. The machine, seen below, is advertised as a family washing machine. Price's model number was WA52J8700.


"This part was on the floor, completely detached from it all, all of these pieces back here were sprung out on top of it on the side," Price said.

She described it as an explosion.

"It crumbled it like paper," she said. "There's still pieces of washing machine that threw itself into it."

"There are dents in my garage doors here, you can see where the pieces flew off and hit here and there are holes in the wall," she said. "Where it hit the dryer, it cracked a hole in that."

But Price had more concerns than just the damage done to the room.

Her daughter and dogs are constantly in and out of the laundry room.

"My daughter feeds them twice a day in here so that was kind of my big, any one of us could've been in here and it could've taken us out," Price said.

Price said the machine flipped on it's side during the explosion.

After assessing the damage and cleaning up, Sarah called Samsung.

"They were very apologetic it happened and told us to take pictures," she said.

But Price wanted to know why it happened as she says Samsung didn't tell her anything or send anyone out to look at the damage.

Needing more answers, she contacted me.

After doing some digging, we quickly found similar incidents.

Micah Martin's Samsung Top Load Washer was a different model than Price's, but their stories are similar.


While his machine was washing a set of sheets, Martin says he heard a loud noise.

When he looked to see what happened, he says his machine exploded.

Martin has seven children and pets who spend a lot of time in the house and, just as Price, safety was a concern.

Martin said he battled with Samsung for over three months before receiving a full refund. He also says Samsung did not explain how the explosion happened.

There are several reports filed with the CPSC when it comes to Samsung top loading washing machines. One of those reports filed is the same model as Martin's, only this time injuries were reported.

The report is very similar to Martin's incident. After a loud boom, the top of the washing machine separated from the bottom and the lid flew off.

According to the report, the entire washer lifted off of the ground and spun 180 degrees. The report said the Samsung washer was purchased in June 2013 and exploded in October 2013.

Another consumer had a similar experience with another model, WA56H9000AP/A2.

The report says the machine threw itself violently against the walls, scattering parts and water everywhere.

According to the report, Samsung offered a pro-rated refund for the machine.

Another consumer filed a complaint about their Samsung top load washing machine.

The report says as the washing machine entered the spin cycle and the entire machine exploded and burst into pieces. The entire top of the unit separated and flew into a hallway, and the unit continued to spin violently around the laundry room, ripping holes in our walls, dryer, cabinets, flooring, etc.

The report goes on to state that shards of metal and large pieces of plastic were lodged in the walls and hurled into other rooms of the home with great force.

It was a similar experience for the consumer who filed this report with CPSC.

Their Samsung washing machine was the model #WA45H7000AW. According to the report, there were two explosions from the machine that were felt across the entire house.

The report goes onto explain "there was a huge dent put into the side of our dryer and water and washing machine parts all over the floor...Samsung needs to recall this item and find a fix to repair the issue before continuing to sell these dangerous items to the unsuspecting public at risk of property damage or injury to persons."

It was the same story for Rene Delemos; she heard a big bang and found her Samsung washer completely destroyed.

Delemos said the machine turned in a complete circle and moved three feet from where it was originally located.

Delemos said she fought with Samsung for almost two months before they agreed to replace her unit.

Brandy Skelly had a Samsung WA50F9A7, which was a 5.0 cubic foot top loader.

She tells me it exploded during the spin cycle. She described the incident that she heard as an incredibly loud noise. The drum became detached and caused the entire top half of the washer to detach and fly off. She says the force knocked holes in the walls and the collision damaged her dryer.

She says the washer kept moving until she unplugged it from the wall, and it ripped the water supply out of our wall as well.

She says Samsung replaced both her washer and dryer with a newer model.

Amanda Shults says she had her Samsung Top Loader washer for only 7 hours before hearing the same bang.


Shultz tells me Samsung paid for the damages to her home. She also says her washer and dryer were replaced.

Samsung provided me with this statement:

"At Samsung, customer safety and satisfaction is our number one priority. We aim to promptly and thoroughly review and investigate any customer matter that is brought to our attention. Ms. Price, Mr. Martin, Ms. Delemos and Mr. Emerson each have different washing machine models. We are taking their concerns very seriously and are investigating each individual case carefully in order to address them properly.
While unfortunate, their experiences are very rare when compared to the number of washing machines we sell each year. For our products' optimal performance, we strongly encourage all of our customers to read our user manuals and ensure they follow our guidelines for proper machine use and care."

If you have had a similar experience, you can file a report here

Samsung also has a service request form for those needing help with their products and you can register a complaint here.