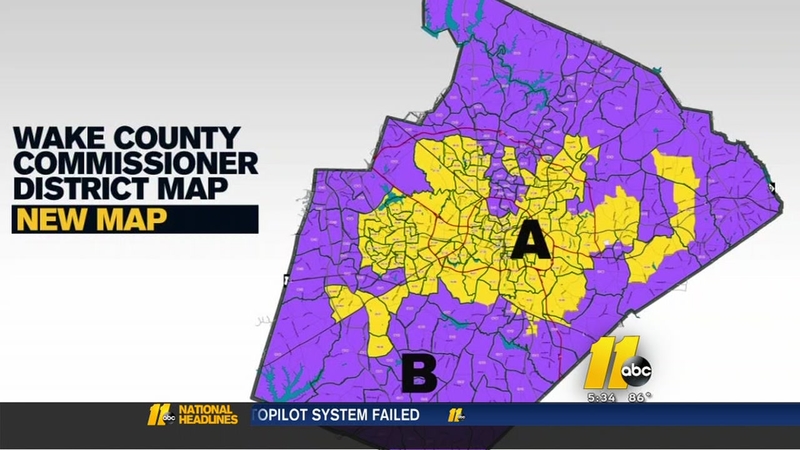 RALEIGH (WTVD) -- The U.S. Fourth Circuit Court of Appeals ruled Friday that the voting districts drawn by the General Assembly for the Wake County Board of Commissioners and Board of Education are unconstitutional.

The ruling throws elections scheduled for this November into doubt.

The 3-judge panel said the districts created by the Republican-led legislature violate the right of one person, one vote guaranteed under the Constitution's Equal Protection Clause in the Fourteenth Amendment.
Following an election that put Democrats in control of the school board, in 2013, the General Assembly passed a law that changed the school board makeup from nine single-member districts to seven and set new district boundaries. It also created two "super districts" that overlaid the others.

In 2015, the General Assembly passed another law making the system of electing county commissioners the same.

In their ruling Friday, the judges wrote the "plaintiffs proffered uncontroverted evidence of an illegitimate factor predominating in the skewed, unequal redistricting: an attempt to guaranty Republican victory through the intentional packing of Democratic districts."

While recognizing that partisan gamesmanship is acceptable in the drawing of districts, the judges held that the districts drawn up in this case went too far. They said the districts did not allow voters greater representation, did not increase the alignment between citizen's voting districts and their assigned schools, as claimed by the map drawers, or reduce campaign costs.

The ruling issues a permanent injunction against using the new maps as drawn.

"We see no reason why the November 2016 elections should proceed under the unconstitutional plans we strike down today," the judges wrote.

It's now not clear what happens to all nine Wake County school board seats and the two new regional board of commissioners seats set to be voted on November 8.

ABC 11 asked Wake County Board of Elections Director, Gary Simms what happens next.

"We're going into it with the attitude we've always had--our job is to conduct the election whatever direction we are given we are going to follow the law," Simms stated.

Now board of elections officials are grappling with what happens to their candidacy and position on the November ballot.

"I'm hoping that some decisions will be made but we just read it this morning and at this time there have been no decisions," Simms said.