Would you let your kids swim in the Dan River? Would you let your kids swim in the Dan River?

EDEN, N.C. (WTVD) -- It sounds like something out of a third grader's standardized testing: "If 39,000 tons of coal ash spilled into the river and they got 3,000 tons out, how many tons are left in the river?"

36,000 tons. That's how much coal ash (at minimum) is still in the Dan River after a massive spill from the Duke Energy coal plant in Eden, NC on Feb. 2. The energy giant has since stopped trying to remove it - a decision green-lighted by the EPA - and, this week, the state lifted the recreational water advisory on the Dan. That means if you want to swim, tube, fish, clam, or just hang-out-and-cool-off in the Dan River, according to the State of North Carolina, you're good to go.

This is how a spokesperson for the Department of Health and Human Services (DHHS) summed it up for us in an email:

OEEB's evaluation of the sediment and surface water data, collected after the work was completed, confirms that no incidental ingestion or skin contact risk exists for the sediment or the river water. Contaminants associated with the coal ash spill are at levels that should not pose a health risk during recreational use of the river. The Department will continue to monitor data as it becomes available to identify potential health risks.

The part that caught our attention is "no incidental ingestion or skin contact risk exists for the sediment or the river water."

Here, if you've got a 30 extra seconds, watch this short clip that we shot up on the Dan River last week. 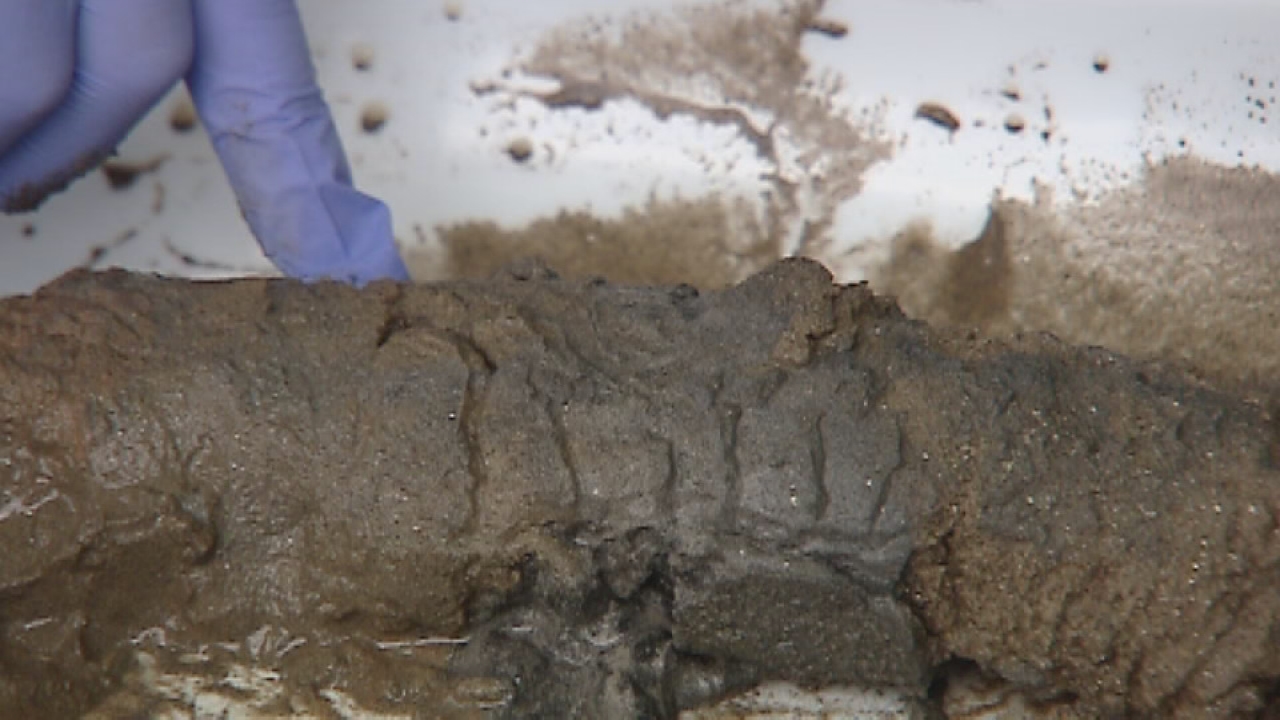 It shows a plug, or core sample, pulled from the river bottom about three feet out from the bank. You can clearly see a couple inches of brownish sediment and then a layer of dark-grey, almost shimmering material, then more brownish sediment.

Pete Harrison, with the Waterkeeper Alliance, took the sample last week and is convinced what you're seeing is a thick layer of coal ash. He says testing should confirm that in the next couple days.

And that begs the question: if there are still 36,000 tons of coal ash in the river (Duke's own number) and you can find it - easily - just underneath a thin layer of sediment, why would the state say the river is safe?

We've been asking this question for the past three days and, so far, no one has been able to answer it for us. State officials have repeatedly passed the question to other agencies and no one has been willing to go on camera for an interview.

Now, if you're wondering why we shouldn't walk around in coal ash in the first place, don't feel bad. Up until now, that largely been a theoretical question; Duke Energy was trying to get the coal ash out of the river and people weren't allowed to use it recreationally. But now Duke has stopped trying to clean it up and the state has lifted that recreational ban and that theoretical question - why shouldn't we walk around in coal ash - has gotten very real.

Doctors tell ABC11 health concerns run the gamut, from rashes to stunted brain development to myriad cancers. "It can cause eye, skin irritation, rashes, redness" said Lynn Ringenberg with Physicians for Social Responsibility. "If you ingest a little it can cause stomach problems and ulcers, kidney damage, it can affect the nervous system and can be absorbed through the skin. There are health concerns with that much coal ash in the water."

In the case of the Duke Energy spill, that "nasty stuff" has settled on the floor of the Dan River from Eden all the way to Kerr Lake, some 70 miles away. And in many cases, those heavy metals are environmentally and biologically toxic. "Coal ash contains the deadliest heavy metals on the planet earth," Ringenberg said. "If you just list a few of them it's mind-boggling. You've got arsenic and lead and mercury and cadmium chromium selenium, beryllium, boron. It just has all sorts of nasty stuff in it.

And environmentalists say it's not clear how long that will last. "How does it dissipate over the next 10, 20, 30, 40, or 100 years?" wonders Ringenberg. "Does it just leach out and it's fine or do these heavy metals stay toxic? I wouldn't allow my kids or grandkids to play in that river."

So here's a question for you (take our poll and weigh in "officially"): we know there's still coal ash in the Dan River. Would YOU let your kids swim in the Dan?