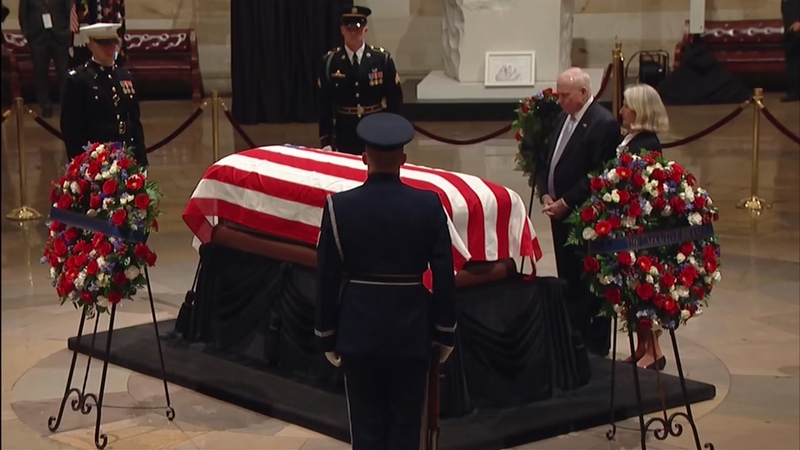 President George H.W. Bush will lie in state in Washington D.C. with a public visitation in Houston, before arriving at his final resting place in College Station, alongside wife Barbara and daughter Robin.

H.W. Bush is the 41st President of the United States. He died at the age of 94, less than eight months after his wife passed.

Bush's funeral service will happen Thursday at 10 a.m. at St. Martin's Episcopal Church in Texas, but there are many other services planned before then.

The body of President George H.W. Bush is leaving the funeral home and heading to Ellington Airport.

At 11:30 Monday morning, the casket and Bush's immediate family got on the airplane normally called Air Force One--the plane is not officially considered Air Force One unless the current president is on board--to head to Washington D.C.

Bush is scheduled to arrive at the Capitol and begin lying in state before 5 p.m.

RELATED: George H.W. Bush's final words: 'I love you, too'

Bush will remain at the Capitol until Dec. 5. That day he will spend the morning at Washington National Cathedral before being returned to Texas' St. Martin's Episcopal Church for his Dec. 6 funeral.

The honorary pallbearers for the first movement of Bush's body will be members of Bush's secret service detail.

President Bush will be wearing his final pair of socks that will pay tribute to his lifetime of service in the Navy.

The train will run through Tomball, Magnolia and Navasota on the way to College Station, and the ride is expected to last 2.5 hours.

Only five other presidents have had funeral trains, with the last being President Eisenhower. This was something President Bush wanted because he loved trains.

Once the train arrives in College Station, it will be greeted by the Corps of Cadets. At the library, there will be a brief service with a flyover with the missing man formation.


Following the service, the family will accompany the casket to the burial site, alongside his wife Barbara and daughter Robin.

RELATED: George and Barbara Bush: A love story for the ages