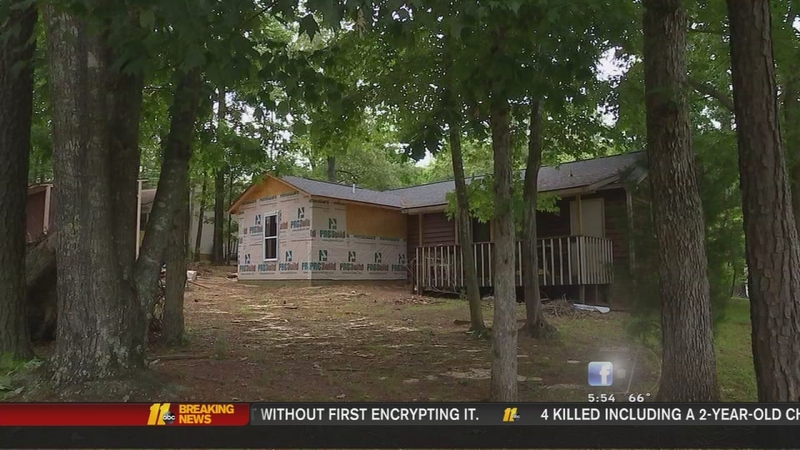 SANFORD, N.C. (WTVD) -- When you hire someone to build an addition to your home, you trust them with a large responsibility. But after receiving excuse after excuse, one homeowner is out of trust and patience.

"I was going to move my bedroom back here and use that as a weight room," Donnie Battle said.

It was supposed to be an addition that would give him a little more room.

"To start with, they had to dig the foundation that took a while," Battle said.

Things didn't progress much from there.

"Once he got that cement down it took him another month to come back to put the brick up," he said.

Despite Battle paying Toro more than $11,000, work was happening sporadically.

"He got the structure up and then he'd be gone for another month or so," Battle said.

Outside addition before work

Fed up, Battle got in touch with me and I reached out to Toro. In February, Toro told me he would finish the job right away.

Inside the addition with Donnie

I got back in touch with Toro in May and he responded with this email.

This Job will be complete by June 12th free of charge and will give the Battles $150 week until job is complete as long as it doesn't air. The drywall is going to be delivered tomorrow and will start hanging on Friday.

While the deadline of June 12th came and went, work did happen.

"He put up the drywall, the roof, put the fixtures in the bathroom, the tile down, the carpet down," Battle said.

A lot of work Battle is thankful for.

"We wouldn't even have the surrounding up if it wasn't for you," Battle said.

Inside the house after some work

But now Donnie is waiting again. He still has no toilet, sink, and is still waiting on siding.

Back in September Toro told us he would have a plumber at Donnie's house by the end of the week and the siding would be in soon.

Unfortunately, Battle turned 59 recently, and the construction is still not complete. We gave Toro more than a month, and it's still not done despite Toro continuing to say it would be. So far, Toro paid $450 for the three weeks of not getting the job done, but they are still owed for many more weeks of payments since he didn't finish the job like promised on June 12th.

Remember, when it comes to any home improvements, make sure you do your research. We have a great checklist to use when talking to contractors.