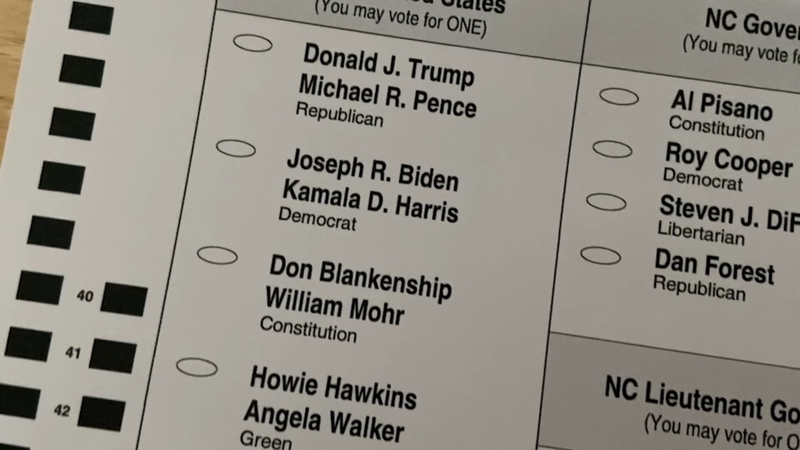 WASHINGTON -- The Supreme Court will allow absentee ballots in North Carolina to be received and counted up to 9 days after Election Day, in a win for Democrats.

In a 5-3 decision, the justices on Wednesday refused to disturb a decision by the State Board of Elections to lengthen the period from three to nine days, pushing back the deadline to Nov. 12. The board's decision was part of a legal settlement with a union-affiliated group.

Under the Supreme Court's order, mailed ballots postmarked on or before Election Day must be received by 5 p.m. on Nov. 12 in order to be counted.

The newly appointed justice, Amy Coney Barrett, took no part in the decision because "of the need for a prompt resolution and because she has not had time to fully review the parties' filings," the court said.

"This is the first of two similar, but not identical, cases pending before the U.S. Supreme Court involving the mid-election rewrite of North Carolina's election laws," Berger said. "The precedent set in this year's Supreme Court decisions will determine the future of America's elections. The question is simple: May unelected bureaucrats on a state panel controlled by one political party overrule election laws passed by legislatures, even after ballots have already been cast? If public confidence in elections is important to our system of government, then hopefully the answer to that question is no."

"North Carolina voters had a huge win tonight at the U.S. Supreme Court," Stein said. "The Court upheld the State Board of Elections' effort to ensure that every eligible vote counts, even during a pandemic. Voters must have their mail-in ballots postmarked by Election Day, but now we all have certainty that every eligible vote will be counted. Let's vote!"