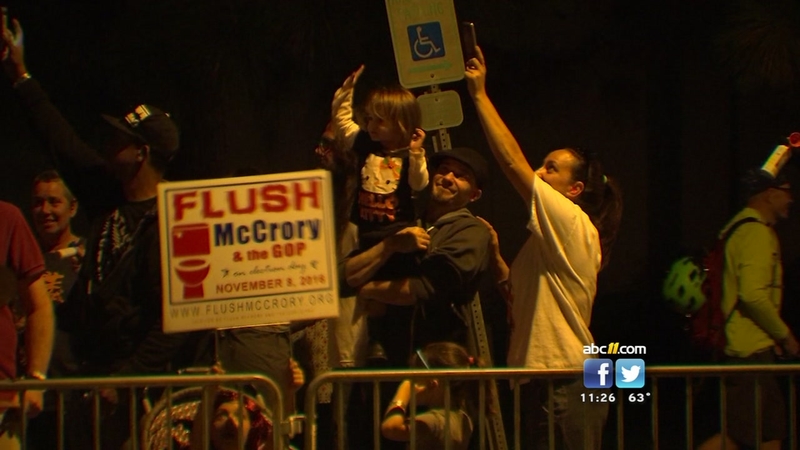 One final blast against HB2

DURHAM (WTVD) -- They handed out ear plugs one last time outside the Executive Mansion. It was the final "air horn orchestra" protest on the calendar. The next big date, that all sides are concerned about, comes next Tuesday.

By dusk, the line of demonstrators stretched Blount Street and onto Jones and down to the Legislature. And by 7 p.m., the sound was deafening.

For the 30th Wednesday since House Bill 2 was signed into law by Gov. Pat McCrory, these anti-HB2 demonstrators sounded off with air horns to show their displeasure over the measure they believe discriminates against transgender people and tarnishes the state's image.

With over 340 air horn demonstrators, this 30th and final anti-HB2 protest aims to break a Guinness World Record. pic.twitter.com/l548rAtiHw

They call it the final protest, because Election Day is the finish line.

"The election is next Tuesday, so our goal is to win on Tuesday," said protest organizer Grayson Haver Currin. "Winning would be Pat McCrory losing."

The controversial law dominated the governor's race. In his challenge to Governor McCrory, NC Attorney General Roy Cooper has called for the law's repeal. The governor has defended HB2 as a common sense public safety measure.

"The only people still talking about (HB-2) are Roy Cooper and his fringe allies," said NCGOP spokesperson Kami Mueller.

"I think the people of North Carolina are smart enough to know the difference between a lot of hot air and real results," Mueller said, pointing to the state's job gains and tax cuts since McCrory took office.

In Charlotte on Wednesday night, The Charlotte Observer hosted a town hall style discussion on HB2 and streamed it live on Facebook.

There were no politicians. It was everyday people on all sides, telling their stories.

Line of demonstrators for Air Horn Orchestra #30 stretches from Executive Mansion to the Legislature. Final protest against #HB2 pic.twitter.com/CvYC8P4P8z

"This law deputizes folks to patrol the bathrooms and quite frankly it's appalling," said Fletcher Page, a 24-year old transgender man from Piedmont, S.C., who sat on the panel.

Back here at the Executive Mansion, 343 demonstrators turned out to blow their air horns. It should be enough to land the group in the Guinness World Record book.

But the goal these protesters truly set out to achieve is to unseat McCrory next Tuesday for his support of the controversial law.

That remains to be seen.