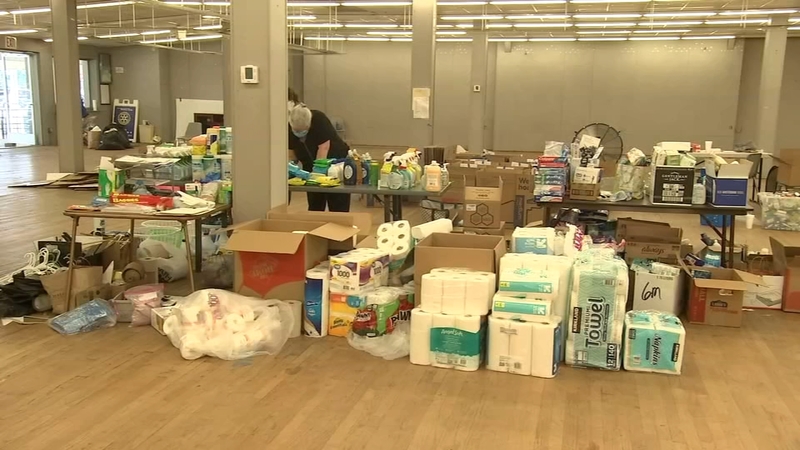 FUQUAY-VARINA, N.C. (WTVD) -- A team of volunteers and donors are working together to collect items for Afghan refugees ahead of their resettlement in North Carolina.

Over the past week, the group has begun to fill up the old Stephens Hardware Building on Broad Street in Fuquay-Varina.

"My heart just went out to people arriving in this country with a suitcase or less than that, and having to rebuild their lives," said Christine Heib, the coordinator for the Fuquay-Varina Afghan Refugee Donation Center.

Heib has reached out to friends and local businesses for assistance, noting an overwhelmingly positive response. They're collecting bedding, kitchenware, cookware, furniture, children's supplies, toys, clothing and more over the next couple months.

"I just thought that we ought to take part of the leadership and say they're welcome," said Wray Stephens, one of the building's owners.

Stephens, a member of the Downtown Fuquay-Varina Rotary Club, also worked with the group's membership to donate a number of items that were originally going to be used for a charitable-fundraising yard sale.

"(I said) suppose you give all of that to this cause that needs exactly what we have and then we'll start over. And they agreed to do that," said Stephens.

Faisal Khan, founder of the Carolina Peace Center, has been speaking directly with relief agencies to ensure refugees have what they need.

"For example if we have a family of four, we'll get a bed for them ready, we'll get a sofa set ready. Whatever's ready. A box they need for a family of four, that have toothbrushes, toothpaste, hygiene kits, items that are needed to start," Khan said.
Based on his conversations, he's anticipating 100 refugees to come to North Carolina in the next one to two months, calling on local and state leaders to take a more proactive role in providing assistance.

The need for all of this stems from the Taliban's takeover of Afghanistan, following the US's decision to withdraw soldiers from the country.

"This was an opportunity for everybody to come and step up to the plate and show this is what happens when good people come together as a humanity serving people who are most vulnerable. We've seen the pictures, we've seen the videos of what's going on Afghanistan," Khan said.

Those coming over are refugees who received Special Immigrant Visas, given to those who assisted the American military, people likely at high-risk of retaliation from the Taliban.

If you're interested in donating, you can drop off items at 405 Broad Street in Fuquay-Varina, NC 27526 or 201 West Chatham, Suite 110-B in Cary; if you choose to drop a donation off at the Cary location, e-mail nchelpnetwork@gmail.com 24 hours in advance.

Here is an Amazon Wishlist for desired items.