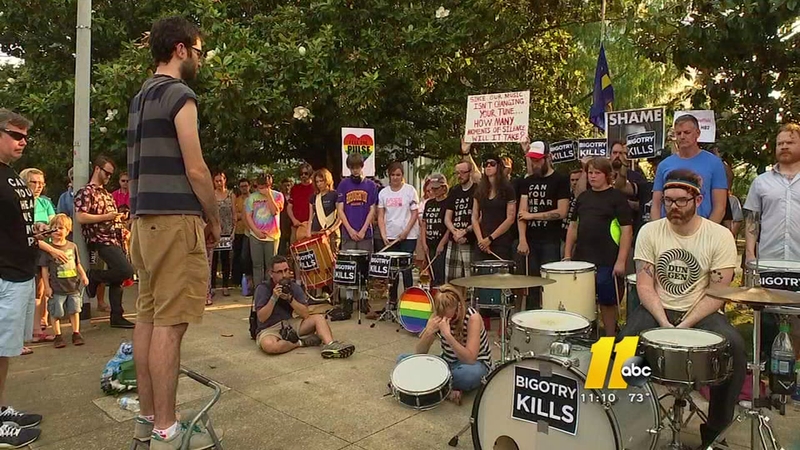 "Today we will refrain from sounding our horns the way we have for the last nine weeks," said organizer Tina Haver Currin.

The protesters known as the air horn orchestra paid tribute to the Orlando shooting victims.

Instead the group invited a conductor to lead the group in 49 drum hits. Each hit representing one of the victims killed in the Orlando nightclub massacre.

"The tragedy in Orlando certainly upped the stakes of people needing to get out here and make some noise," said Will Goodyear, one of the protesters and percussionists.

This was the 10th Wednesday the group gathered in front of the Executive Mansion to make noise to protest the law.

The law bans transgender people from using bathrooms that align with their gender identity in government buildings and public schools. Many in Wednesday's crowd, as well as in past protests, say the law fuels fear and anger against the LGBT community.

"It gives a green light to homophobia," Goodyear said.

"We have signs here today that say 'bigotry kills,' " said Grayson Haver Currin, the other organizer of the weekly protest.

Bigotry is what people in Wednesday's protest along Blount Street say fueled the massacre in Orlando. According to them, the new law is fueling hate in North Carolina.

Instead of the usual noisemaking...they're tapping drums for each of the 49 victims lost in #OrlandoShooting #ABC11 pic.twitter.com/FjPT29YKKZ

Supporters of HB2 say the law is not about hate but about protecting women and children in bathrooms and locker rooms.

Soon after news of the shooting in Orlando spread, NC Gov. Pat McCrory ordered flags to be lowered to half-staff and issued this statement:

"The shooting that occurred in Orlando was a tragedy, and something that should never take place in our country. Those who died were innocent victims of an inexcusable act of violence. My prayers to out to the victims' families as well as to Mayor Buddy Dyer and the City of Orlando as they try to comprehend this tragic event. I have reached out Florida Governor Rick Scott offering my condolences and any assistance we as a state can provide...."

Leaders of the air horn orchestra said they will be back to full volume next week.