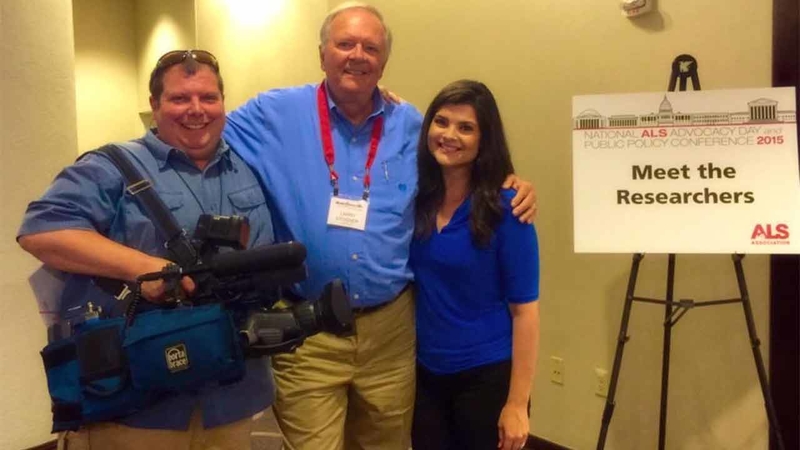 WASHINGTON (WTVD) -- Tuesday was ALS Advocacy Day and around 1,000 people went to Capitol Hill to fight for their cause-- among those attending was former ABC11 anchor Larry Stogner.

Like thousands of others in the U.S. living with the disease, each day grows more difficult for Larry.

"Compared to a lot of folks that I have talked to here, I'm doing remarkably well," Larry said. "I'm still active, I'm traveling, still playing golf. That's not going to go on and on, but everyday that I'm able to do that is a victory of sorts."

Larry is one of hundreds of patients on Capitol Hill lobbying lawmakers like Senator Richard Burr for better access to care and more advanced research.

"It puts a human face on it," Larry said. "I can tell how it was getting through to him because it was so personal."

Many of them confined to wheelchairs, some unable to speak, but all determined to make their voices heard.

"This is one of the worst diseases I think a person can get because we don't understand why it happens, we don't have a lot of things we can do to slow it down," said Duke neurologist Dr. Richard Bedlack.

"In terms of tools and technologies, it couldn't be a better time for ALS research. We also have found some genetic clues that account for a large percentage of ALS and technologies as to how we might use those clues to begin to develop treatment," said Dr. Lucie Bruin, Chief Scientists for the ALS association.

But advocates said it's just the tip of the iceberg.

"People know about ALS, now the question is do they know what ALS really is and how it strikes people? And that's what we're doing here," said Vice President of Public Policy for the ALS Association.

For Larry, the journey to Washington is a quest for hope.

"Whatever influence I can have to increase awareness to bring in money for more research for this disease, I'm there," Larry said. "It's important that they be heard and that the screws are turned on Congress to do everything they can do to make research more viable for this God awful disease."

Hundreds of #ALS patients are lobbying lawmakers on Capitol Hill including our own @StognerABC11 on @ABC11_WTVD at 4 pic.twitter.com/nFu8e5bXNo