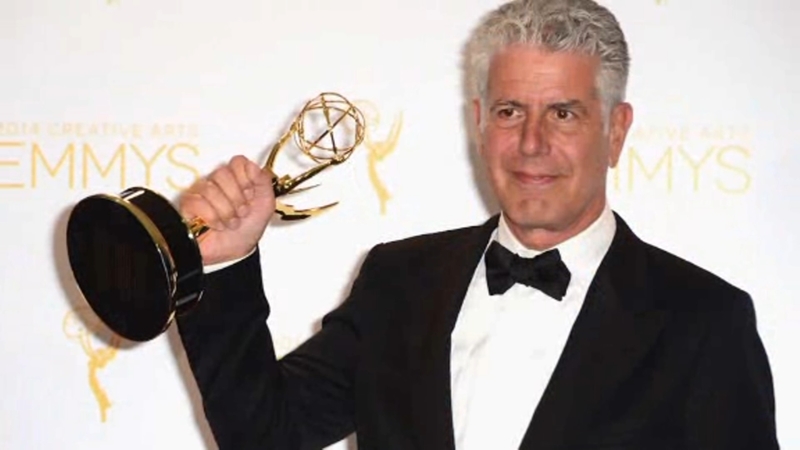 Popular culinary personality Anthony Bourdain has been found dead in France of an apparent suicide at age 61.

"I confirm that we have learned this morning about the death of Anthony Bourdain by hanging, in a luxury hotel called Le Chambard, in the village of Kaysersberg (south of Strasbourg)," Prosecutor Christian de Rocquigny du Fayel told ABC News. "I launched an inquiry to determine the precise cause of the death of M. Bourdain. A Medical examiner checked the body. There are no elements showing that a third party played a role in his death."

"It is with extraordinary sadness we can confirm the death of our friend and colleague, Anthony Bourdain," the network said in a statement Friday morning. "His love of great adventure, new friends, fine food and drink and the remarkable stories of the world made him a unique storyteller. His talents never ceased to amaze us and we will miss him very much. Our thoughts and prayers are with his daughter and family at this incredibly difficult time."

The network said that his close friend, French chef Eric Ripert, found him dead in his hotel room. Bourdain was in France working on his award-winning CNN series, Anthony Bourdain: Parts Unknown.

Ripert released a statement:
Anthony was a dear friend. He was an exceptional human being, so inspiring and generous. One of the great storytellers of our time who connected with so many. I wish him peace. My love and prayers are with his family, friends and loved ones.

Anthony was my best friend. An exceptional human being, so inspiring & generous. One of the great storytellers who connected w so many. I pray he is at peace from the bottom of my heart. My love & prayers are also w his family, friends and loved ones. pic.twitter.com/LbIeZK14ia

The eleventh season of his show Parts Unknown debuted on CNN last month. The show won a Peabody award in 2013.

"He's irreverent, honest, curious, never condescending, never obsequious," the judges said. "People open up to him and, in doing so, often reveal more about their hometowns or homelands than a traditional reporter could hope to document."

Bourdain won five Emmys for Parts Unknown and two Emmys for his earlier Travel Channel show No Reservations. In addition to his shows, Bourdain was known for his books, such as his 2000 best seller, Kitchen Confidential: Adventures in the Culinary Underbelly.

"He explored the human condition and helped audiences think differently about food, travel and themselves," CNN wrote of his work. "He advocated for marginalized populations and campaigned for safer working conditions for restaurant staffs."

He is survived by an 11-year-old daughter, Ariane Bourdain. His girlfriend, actress Asia Argento, released a statement asking for privacy.

Last year Bourdain told ABC News that he'd had a "live hard, die young" attitude when he was younger. In 2015, he said he spoke to Wine and Spectator Magazine about how he'd like to be remembered.

"Maybe that I grew up a little," he told the magazine. "That I'm a dad, that I'm not a half-bad cook, that I can make a good coq au vin. That would be nice."

Bourdain also said in an interview with People Magazine last month that he'd like to continue working for the rest of his life, saying retirement was not for him.

"I gave up on that. I've tried. I just think I'm just too nervous, neurotic, driven," he said. "I would have had a different answer a few years ago. I might have deluded myself into thinking that I'd be happy in a hammock or gardening. But no, I'm quite sure I can't. I'm going to pretty much die in the saddle."

Suicide rates increased by 25% across the United States over the course of almost two decades ending in 2016, according to a study published by the Centers for Disease Control and Prevention on Thursday. Bourdain's death comes just days after fashion icon Kate Spade died of suicide in New York City.