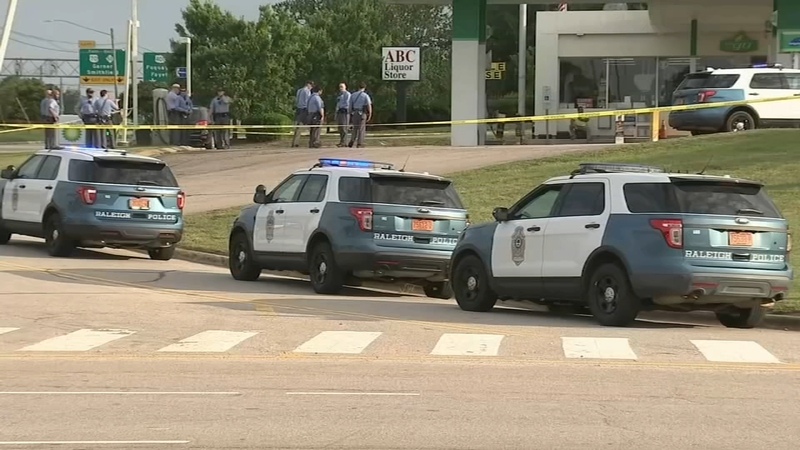 RALEIGH, N.C. (WTVD) -- One person was shot during a robbery attempt at a gas station in Raleigh on Tuesday evening.

It happened at the BP gas station at 3310 Olympia Drive, just south of downtown.

A 44-year-old man was shot. Raleigh Police said his injuries appear to be non-life-threatening.

Were at scene of a shooting at gas station south of Downtown Raleigh. One person was shot during a robbery attempt here. Victim was shot near the gas pumps #abc11 pic.twitter.com/S4HZ5lThsU

The victim was a customer at the store but was shot outside near the gas pumps.

Police said they believe the gunman targeted the customer for robbery.

Crime scene investigators are very focused on the red dodge in the middle of the gas station #abc11 pic.twitter.com/DXq2SSsQIl

Turns out that is the clerks car. He parks it there when he comes in. He tells me someone came into the store and asked for a cell phone charger. He didn’t have one and then went out and jumped him before shooting him #abc11

The store clerk, who did not want to be identified, told ABC11 that the victim came in to ask for a cell-phone charger. The store didn't have the one he was looking for, and he told the clerk he was going to go to the Family Dollar store across the street.

Raleigh police said the suspect was watching and followed the man out, donning a ski mask on his way out the door.

The suspect then jumped the man near the gas pumps, shot him in the leg and fled. Police said it does not appear the two men knew the other.

"It was just like a movie," the clerk told ABC11. "The man just left the store and like three to five seconds, somebody attacked him. Scary and crazy."

Gas was not being pumped at the time of the shooting.

There was surveillance video of the incident, but it has not been released.

The victim was taken to WakeMed and was described as stable. He is expected to recover.