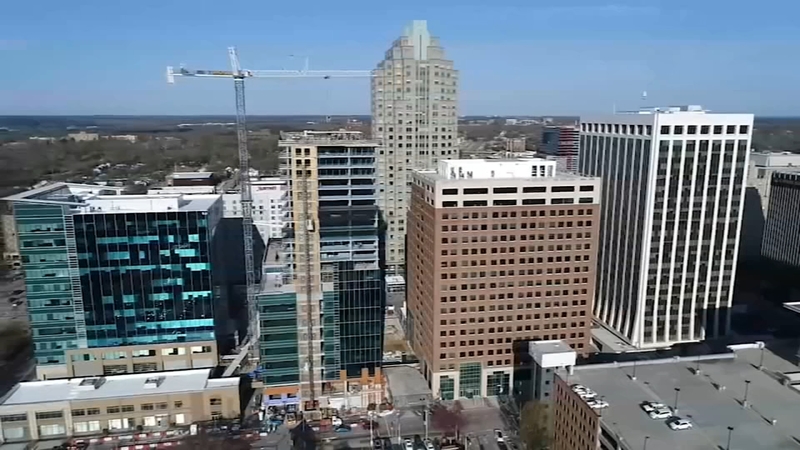 RALEIGH, N.C. (WTVD) -- Brewgaloo returns to downtown Raleigh on Friday night, the most recent big event in the area which has seen an uptick in business and pedestrian traffic.

"Those large-scale events do a great job of bringing in dollars from outside the local market. It's great to get new people into the market to experience downtown as well as the businesses downtown, the exposure of those new customers. It's great for vibrancy. It's great just to walk around downtown and have multiple events going on at any time," said Will Gaskins, Vice President of Economic Development & Planning with Downtown Raleigh Alliance.

The group's report found in the first quarter of 2022 food and beverage sales up 59% and pedestrian traffic up 63% from the same time period in 2021.

"We'll be serving beer (at Brewgaloo). We'll have Young Hearts Distilling just one block away from that. So there's opportunity to kind of capture some new guests and show people what we're offering," said Chris Powers co-owner of Trophy Brewing Company.

The big events have also helped boost the hotel industry, which has seen a 48% increase in hotel room sales revenue since the second quarter of 2021.

"Dreamville was huge, huge for the market. It was a big sell-out not just for the city of Raleigh, but the county as a whole," said Russ Jones, who co-owns The Longleaf Hotel on North Dawson Street, as well as other properties in Raleigh.

To keep attracting larger festivals, Jones believes the city needs to expand its hotel capacity, feedback that economic development teams have received in the past.

Currently, Downtown Raleigh Alliance reports there are 259 hotel rooms under construction, and plans to add more.

"Specifically something that will be coming over the next months is the two sites at the end of Fayetteville Street, the city's sites two and three which have been targeted for Convention Center hotel expansion, so a 500-bed hotel. There's an ongoing effort right now to release that through a (Release For Bid) for developers to submit proposals to build," Gaskins explained.

Leisure travel has had a strong return, a trend that is projected to continue moving forward. Now Jones said the focus is on mid-week sales.

"We are still waiting on that corporate traveler. As good as things are, and we talked about these large events, they're weekend events. So we're waiting to see that business travel come back. And some of that is just getting the Convention Center up and rolling again, but a lot of that is getting these office tenants back to work and start bringing people in from out of town," Jones explained.

Trophy Brewing is also hoping to benefit from a fuller return to offices, located within walking distance from major tech employers like Pendo, Red Hat, and Citrix. They have four locations in Raleigh, including three downtown. Friday, their State of Beer location on Hillsborough Street was busy with people sitting outside, taking advantage of the warm weather. Downtown Raleigh Alliance's Report also touched on the demographics of those who live downtown, which stated residential occupancy was nearly 96%, and the three largest population groups are 34 years old or younger

"(They're) a huge part of what our business needs. We'll have folks that come out two to three times a week, whereas folks who are a little bit older, a little bit more established typically may come out one time a week," Powers explained.

"That actually matters not just for hotels, but for restaurants in downtown too. We think of ourselves in the hotel industry as really suffering, but restaurants did too. So getting that level of energy, those folks are coming to spend dollars and that really means a lot," Jones added.
Report a correction or typo
Related topics:
businessraleighfestivalbusinessweekend happeningscraft beereventstourism
Copyright © 2022 WTVD-TV. All Rights Reserved.
TOP STORIES
Death toll rises to 21, mostly children, in TX school shooting
Downed tree causes power outages in Raleigh
Biden to sign policing order on anniversary of Floyd's death
Triangle activists, law enforcement react to deadly Texas shooting
Southern Baptist Convention to release list of clergy sex abusers
Uvalde school shooting: What we know about 19 kids, teacher killed
Plans revealed for new development where circular Raleigh hotel stands
Show More
A look at some of the deadliest US school shootings
Entrepreneurial Fayetteville sisters honored with Key to the City
Camp Lejeune warns people of explosives-filled beach area
Canes fall 4-1 in New York; series tied at 2
Johnston Co. dad starts Facebook group to help families find formula
More TOP STORIES News