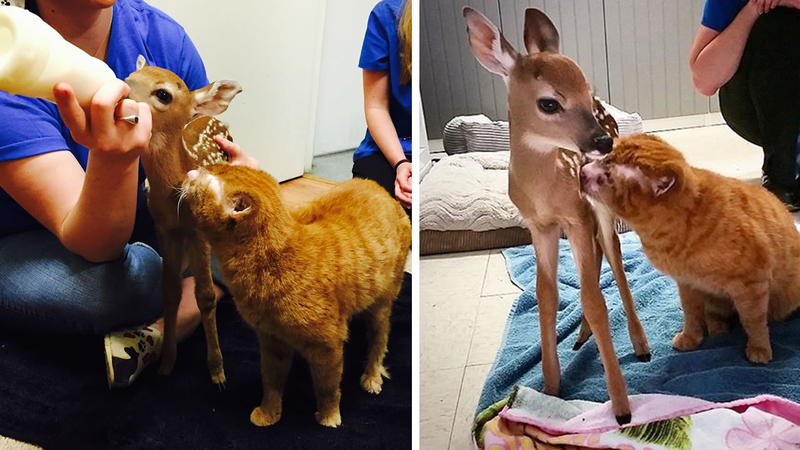 RALEIGH (WTVD) -- We first introduced you to Russell the cat over a year ago through his story of survival. His Raleigh home burned down and he was trapped in the rubble for four days suffering from severe burns.

Russell developed a fan base from around the world and has been being nursed back to good health for over a year at Raleigh's Emergency Hospital and Urgent Care.

And now the same animal shelter that helped Russell is extending help to another animal, a fawn.

"She came in, she was hungry but healthy," Alyx Reinhardt said.

Reinhardt said a homeowner watched the fawn in their backyard for more than a day before bringing her in.

"Noticed that mom had not been around, and she started to try to nurse on his dog and she wouldn't leave his porch," Reinhardt said.

As soon as the fawn arrived, who the staff has named Darla, they said she fit right in. Especially when it comes to the resident cat, Russell.

"They're happy to share a bed and be in the same room," she said.

As for Russell's recovery, it's been more than a year of treatments and he continues to show improvement from all of his burns.

"Russell is doing well, we are still working on getting these back feet to heal, we are getting closer and closer every day," Reinhardt said.

Russell and Darla are just two of the cases the hospital has taken in and provided care for through their good Samaritan fund.

The Animal Emergency Hospital and Urgent Care is the only one in Raleigh who will take abandoned wildlife, like Darla.

As for the fawn, while they're bottle feeding her and showing her love and care, the hospital has found a deer rehabilitation specialist for Darla to go to.

"She can kind of get her fed, get her grown up and get her back in the wild," Reinhardt said.

The hospital gets a lot of calls this time of year about abandoned wildlife, like fledgling birds and bunnies. They say the best advice is to watch them for a day or two to make sure the mom doesn't return. Reinhardt also cleared up one wildlife myth, touching a young animal does not mean the mother will not return. Reinhardt said the biggest thing is to call someone for help before picking up a wild animal and bringing it in.

The hospital's wildlife program is fully funded by the hospital, and they would greatly appreciate donations through their Good Samaritan Fund. It's the same fund that people used to donate to Russell's care and is also used for wildlife animals and stray dogs and cats that need help. Information on the Good Samaritan Fund is on the Animal Emergency Hospital and Urgent Care Facebook page: https://www.facebook.com/AnimalEmergencyHospitalAndUrgentCare/app_190322544333196