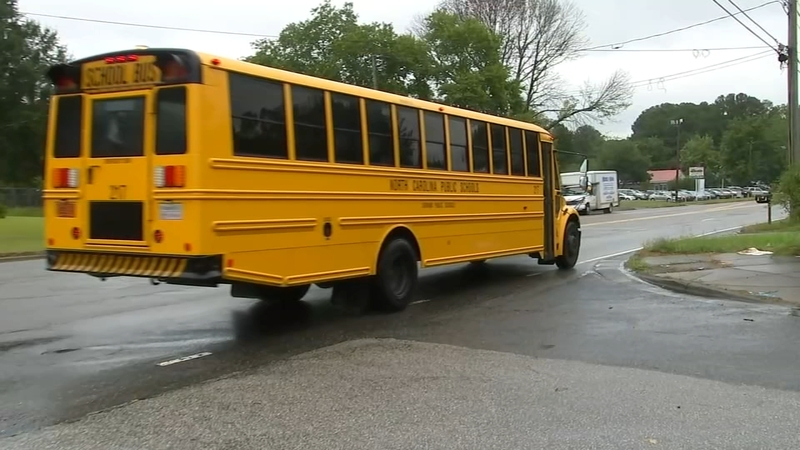 DURHAM, N.C. (WTVD) -- The school bus driver shortage is affecting families across the state, and it's especially acute in Durham. Frustrated drivers feel unappreciated, overworked and underpaid while the families they serve lose patience after daily delays.

LaKeya Clinton is one of the parents who watch school buses roll past their stops as the drivers run extra routes. She tracks the location of her daughter's bus using an app on her smartphone, and says families have been inconvenienced since the first day of school.

"Over two hours late! She came home (on the first day of school), she was supposed to be home at 4:55. She ended up at home at 7:05," she said while waiting with her daughter Ava for yet another delayed bus Wednesday morning. "Now she comes home about 10 minutes late, right? But now every single day she's been late for school. In fact, she's missed parts of first period. Last week, she missed the entire first period."

"Before it wasn't really a problem because I wasn't missing much," seventh grader Ava said. "But now my grades are going down because I'm missing school; it's ridiculous."

The bus drivers don't like the position they're in now, either. They say the shortage means when a driver's out sick or unavailable for work, those who are still on duty must pick up the slack by taking on another route on an already extra busy school day.

They don't want to have their faces or names shown on camera but one said, "I actually have 5 routes in the morning and 4 in the afternoon. So it's bad for all of us."

They also said they're not paid at the same hourly rate as new hires despite years on the job, and some say parents who send their unmasked children unaccompanied to the bus stop put the health and safety of the drivers at risk, especially if someone at home has been exposed to COVID-19.