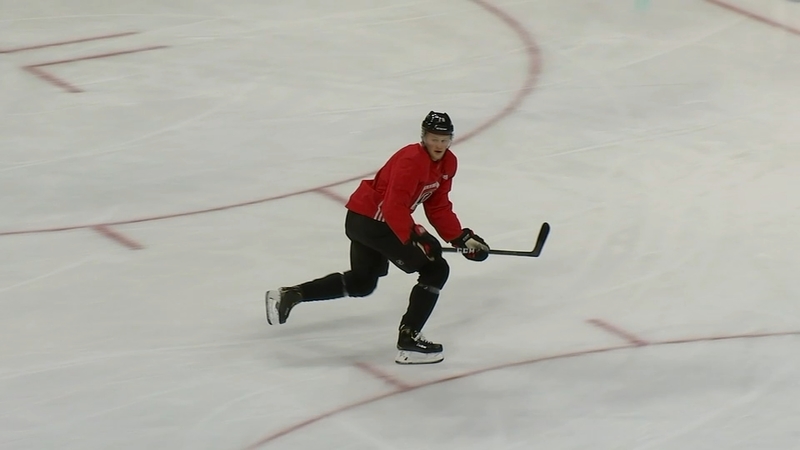 RALEIGH, N.C. (WTVD) -- It's been 335 days since the Carolina Hurricanes took the ice inside PNC Arena and that all changes Thursday night. There won't be any fans inside the building but that can't take away the excitement for 24-year-old Steven Lorentz, who will make his NHL debut.

"Minute by minute, hour by hour, I guess time might tick by slowly," Lorentz said. "The nerves might creep up on me a little bit but that's just the way it's going to be and I'm just more excited than anything."

Lorentz's journey to the NHL hasn't been easy -- the Canadian was passed over in the 2014 NHL draft and then selected in the final round of the 2015 draft. He then went on to play in the ECHL and the AHL. Now five-and-a-half years later with so many Canes out on the COVID-19 protocol list, Lorentz is finally getting his chance.

Hockey back in Raleigh. 335 days later.

Steven Lorentz is the first man on the ice. pic.twitter.com/GznGoCR8i6

"It's really cliché, but if you really do all of the right things then things tend to fall into place," he said. "I kind of believed that since the word go, and I was so fortunate the Canes did take a chance on me in the seventh round the year after my draft year. An opportunity is an opportunity."

"Whenever someone has that first game, I always remember how exciting it was for me," Brind'Amour said. "You kind of gloss over it now because we're in a big picture, but for him, it is. For that person it's huge; you just try to enjoy it because you only get one of these."

Brind'Amour described Lorentz as a Cane, not just because he'll be on the ice with the team but because of his attitude and work ethic.

"You talk to the guy and you're like, you come away with a smile on your face," Brind'Amour said. "He's just happy to be alive. He's happy to be having this opportunity to be in the NHL whether there's zero fans. It's not the ideal debut but he's just happy to be here, and he wants to contribute he doesn't want to check the list off that he played a game in the NHL. He wants to do something special and you root for guys like that.