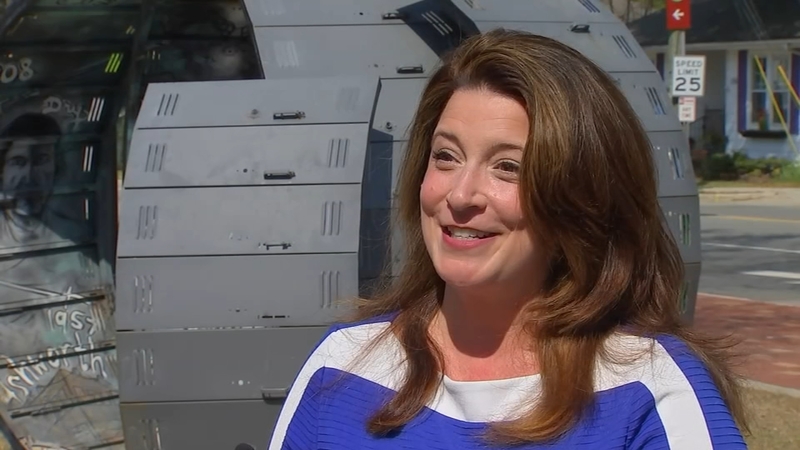 CARY, N.C. (WTVD) -- Celebrating 150 years since its founding, the Town of Cary will soon see its rich history come to life on the stage in an original play created and written by North Carolina native and longtime Cary resident, Dr. Katherine Loflin.

"People think- and it's just not true- that we didn't really show up until RTP showed up and IBM showed up and everybody wanted to live here all of a sudden," said Loflin. "In fact, Cary has been the home of some very important historic events in the history of the country and in the state of North Carolina and I think those stories deserve to be told."

Standing outside the Cary Arts Center where her play, which Loflin has yet to give an official title, is slated to open in late September, the playwright described the daunting task of covering 150 years of history in a two-hour show.

The play, only halfway written, begins with a new family coming to Cary.

"And everybody tells them, the first thing you gotta do when you go to Cary is have a hot dog at Ashworth's," Loflin said.

The stage is set and from the modern-day soda fountain and pharmacy of Ashworth Drugs, Loflin will take you from one story of Cary's past to the next, many of them lesser-known tales of the town that even its keepers of history and lore might find enlightening.

"I was invited into the homes of families who've lived in Cary for generations and they shared with me documents and things that even the friends of the Page-Walker, our historic society, didn't know and didn't have," said Loflin.

Loflin's research for the play led her to the cornerstone of the first African American church in Cary, founded before the town itself, which is still there, behind Cary Elementary School.

Stories of the Evans Family, who sold parcels of land to newly freed slaves after the Civil War, will also be featured.

"Nobody knows the story that Evans Estates, those developments, are named after these African Americans who actually came up with a poverty reduction strategy that still to this day is a best practice," said Loflin.

Did you know, Cary was almost the site of the University of North Carolina and was also in the final running to be the state's capital?

Or how about famed World War I pilot Belvin Maynard's flyover when he buzzed Cary High School- Top Gun-style, long before Tom Cruise pulled it off in the movie?

"He flew so low," Loflin said, "the children could see him waving and his dog Trixie that he brought was barking and you could hear him barking."

Loflin's idea for a play that goes beyond what you'd read in a history book, was in the works before the start of the COVID-19 pandemic.

With no large-scale public events to generate support for the production, she's come up with another idea to promote the play and help local businesses at the same time.

Starting this week, you can find commemorative cards scattered across local businesses in Cary.

Each card is free and shares a story of Cary's past, such as those of the town's beloved Ashworth's -- its secret staircase leading to the masonic lodge above the pharmacy and The Dog House Club, where the men of Cary would gather regularly to chew the fat or discuss important business of the day.

"They were called The Dog House Club because at the end of their meeting, they would watch each other buy ice cream for their wives to go home and the size of the ice cream would indicate how much trouble they were in currently with the wives- how much they were in the dog house," Loflin said.

The commemorative cards, Loflin hopes, will help drive customers back into stores and come this fall, into seats at the theater, to learn and enjoy 150 years of Cary history.

"I think it's important that we share our history," she said. "So people can feel a part of things and where we came from and how we got to be the way we are."
Report a correction or typo
Related topics:
community & eventscarywake countyentertainmenthistorytheaterwake county news
Copyright © 2022 WTVD-TV. All Rights Reserved.
THEATER
Tony Awards has stars and those usually far from spotlight
Meet the Hillside HS theatre director replacing Wendell Tabb
Dancers take to NYC stage to support people of Ukraine
North Carolina woman slated to perform on Broadway
TOP STORIES
FTC sues Walmart over scammers' use of money transfer services
NC GOP unveils state budget; House backs Medicaid expansion path
Some pharmacies limiting Plan B pill purchases as demand spikes
Workers fired for not joining company's daily Christian prayer: EEOC
NC abortion legal battle looms amid standoff between AG and GOP
FDA advisers recommend updated COVID booster shots for fall
Biden administration plans to send out thousands of monkeypox vaccines
Show More
Elmo gets COVID vaccine in new Sesame Workshop PSA
ABC11 to present Raleigh's July 4th fireworks show at Dix Park
Man accused of killing 9-year-old in Durham on trial in federal court
Police investigating two shootings in Cumberland County
Why you should pay down your credit cards right now
More TOP STORIES News