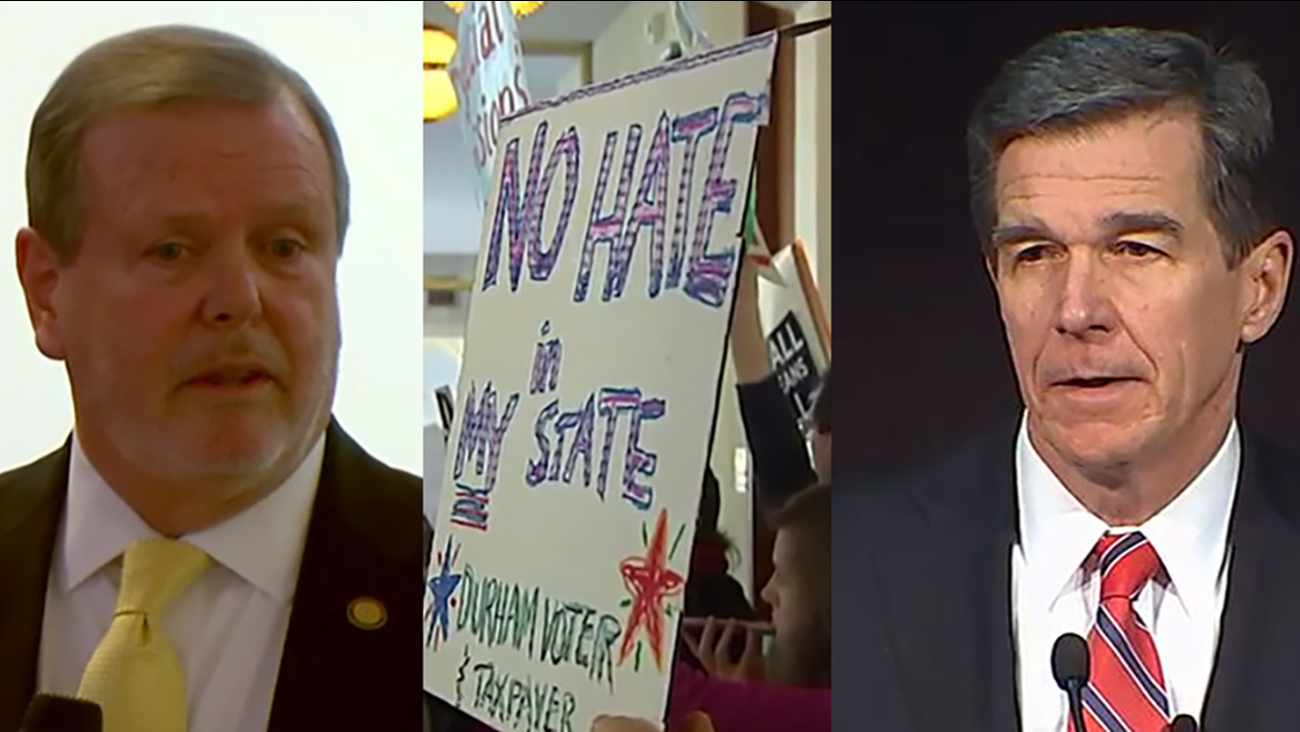 Phil Berger, left, and Roy Cooper both had strong words on Wednesday.

RALEIGH (WTVD) -- Fingers are pointing and accusations are flying after an all-day special session ended Thursday with no change or repeal to House Bill 2.

Republican Senate leader Phil Berger criticized Democrats on Wednesday night for failing to support legislation that would have repealed HB2. Berger told reporters it appears Gov.-elect Roy Cooper and his fellow Democrats want to keep HB2 as an issue.

The sticking point was a measure in the Senate that would have barred from local governments from passing ordinances that expanded non-discrimination protections until next summer.

Some of the reaction:

"What you've had before you today is not some gimmick to create the best of both worlds. It is a good faith effort - given the passion and disagreement surrounding this issue - and it is a reasonable solution that puts HB2 behind us while providing some time to work out some of these broader tensions. Clearly, that's unacceptable to many of you. Surely by now you understand why so many people question your sincerity on this issue. You didn't show up to vote for or against House Bill 2.

Yet you spent the year demagoguing the bill and using it as a wedge issue in the campaigns. You killed efforts to compromise. And then you tried to take credit for the very same compromise. Surely you understand why there's still doubt about whether you really want to repeal House Bill 2 and start over, or if you just want to get your way, and continue to scream at Republicans.

Well, I'm going to give you one more chance to erase that doubt. I'm making a motion to divide the question. We will take two votes: The first is simply a repeal of House Bill 2. Straight up. Yes or no. The second is a vote on the cooling off period. This is your one and only opportunity to show us how serious you are about repealing HB2."

"The legislature had a chance to do the right thing for North Carolina today, and they failed.

People want us to work together for the good of our state. I know there were enough Democratic and Republican votes to fully repeal HB 2 by itself. But Republican legislative leaders have broken their word to me and broken their trust with the people.

My staff and I worked day and night through the past week to forge an agreement that would bring back jobs and sporting events. For the first time ever on this issue, we had House Republican leaders, Senate Republican leaders, Senate Democrats, House Democrats, the Charlotte City Council, business leaders, sports leaders and the LGBT leaders in agreement. The Charlotte City Council held up its end of the deal by repealing its ordinance. When it came time for Republican legislative leaders to do their job, they failed.

This was our best chance. This cannot be our last chance."

"As promised, I called a Special Session to reconsider a manufactured political issue that strategically targeted the city of Charlotte and our state by well-funded left-wing interest groups. This was at least the third time that pressure from the left sabotaged bipartisan good faith agreements for political purposes.

As I've stated multiple times, the balance between privacy and equality is not just a North Carolina issue, it is a national issue that will be resolved by the U.S. Supreme Court in the near future.

North Carolina will continue to be one of the nation's leaders in job growth, education, quality of life and equality for all of our citizens."

"After months of threatening boycotts and misleading rhetoric, not a single Democrat voted to repeal HB2 on a straight up and down vote. It's even more absurd that Govenor-elect Cooper privately pressured Senate Democrats to reject the deal while publicly calling on lawmakers to support a repeal. This is nothing more than smoke and mirrors and the people of North Carolina deserve more than the lies and collusion that Roy Cooper has fashioned himself accustomed to."

"Tonight's vote was nothing but a sleight of hand from North Carolina Republicans. They have lied to voters every step of the way in an effort to advance their discriminatory agenda.

They have done nothing to protect against discrimination and have only further damaged our reputation.

Their lies and partisanship have cost our state and its citizens dearly and we will continue to feel the consequences of their failed actions.

Republicans are holding our state hostage, and we will make sure voters know as they head to the polls next year. We at the North Carolina Democratic Party will continue to fight their failed leadership and to make sure they pay a price at the ballot box for the harm they have done to our state."

"I am appalled but sadly not surprised that General Assembly leadership failed to uphold its end of the bargain by cleanly repealing H.B. 2. We've unfortunately come to expect this from Raleigh Republicans - promoting a rigid ideology no matter the damage to our state's economy or reputation or the well-being of its residents.

These are the facts: with H.B. 2, the same legislature that attempted to undermine the hard-fought voting rights of African Americans calculatedly did great harm to another historically marginalized community of people for political gain. In so doing, Republican state legislators and Governor McCrory sent a clear message to lesbian, gay, bisexual, and transgender North Carolinians - a group that has faced widespread discrimination, harassment, and violence - that they do not deserve equal rights. I will continue to advocate for this discriminatory law's full and immediate repeal.

We must remember that the North Carolinians harmed by H.B. 2 aren't pawns in a political game; they are our neighbors, coworkers, fellow congregants, friends, and family members, and they deserve to be treated with dignity, empathy, and respect. We owe it to them to build a more inclusive state that offers its great promise equally to anyone who proudly chooses to call North Carolina home."

"The failure of General Assembly leaders to live up to their deal and fully repeal HB2 with no strings attached means discrimination lives on. Transgender students will continue to face increased chances of violence and bullying because legislative leaders failed to keep their promise. We support Governor-elect Cooper's call for a full repeal of HB 2 to end this national damage to North Carolina's reputation."

"House Bill 2 is anti-civil rights and anti-LGBTQ hate-filled legislation. We believe Charlotte should not have been forced to repeal its good ordinance before this ideologically-controlled legislature considered repealing it. However, once they did, HB2 should have been repealed in its entirety as promised by the leadership of the NC General Assembly. Our elected officials should have worked to protect all the people of North Carolina but instead they wasted our time and tax money. Both the House and the Senate's all white Republican caucus have proven that they are not fit to govern North Carolina. Both Chambers were found unconstitutional by a federal court earlier this year which ruled that NC districts were racially gerrymandered and must be redrawn and elections must be held again in 2017 for every member of the House and Senate.

The legislature adjourned without repealing House Bill 2 because they could not bring themselves to protect living wages and the civil rights of the LGBTQ community. This is shameful and a disgrace to North Carolina. The majority of the Republican extremists can only seem to get together when they are passing unconstitutional laws that hurt the poor, African Americans, minorities, women, immigrants, public education, the environment and the LGBTQ community. Otherwise, today is proof that they are totally dysfunctional. The hope for North Carolina is that next year, when the courts have demanded that the NC General Assembly fairly redraw the districts and hold an additional election, the people will have the opportunity to judge these legislators at the ballot box."

"Tonight the North Carolina Senate voted to keep the protections provided by our privacy law, HB2, in place. We continue to encourage our leaders to never sacrifice the privacy, safety, or freedom of young girls by forcing them to use the bathroom, shower, or change clothes with grown men just to satisfy the demands of greedy businesses, immoral sports organizations, or angry mobs. Nor should they sacrifice the freedom of everyone to live and work according to their beliefs. We are thankful for the members of the General Assembly who stood up for what is right, and represented the will of voters by stopping the move to cower and cave-in to the City of Charlotte and the Human Rights Campaign."

"We continue to call for the full repeal of HB2, which the North Carolina General Assembly refused to do today. HB2 is an example of the worst kind of law - it targets LGBTQ people, workers, and cities. LGBTQ people in North Carolina need immediate protections from discrimination in the work place and in public accommodations. That's a non-negotiable."

"The General Assembly and Governor McCrory are playing political chicken, and North Carolinians continue to lose for it. It is an outrage that North Carolina's lawmakers could not follow the mandate of the voters and repeal H.B. 2. As long as H.B. 2 is on the books, thousands of LGBT people who call North Carolina home, especially transgender people, are being discriminated against and will never feel safe. This was a counterproductive exercise in reaffirming to the rest of the country that North Carolina wants to remain mired in this divisive dispute."