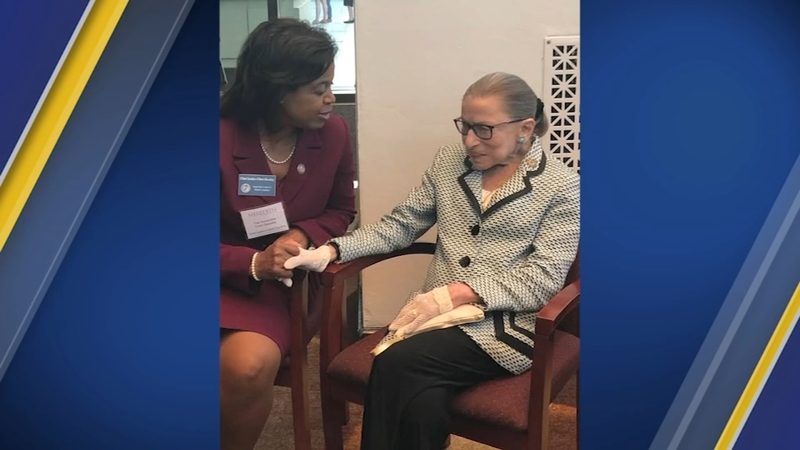 DURHAM, N.C. (WTVD) -- The loss of Supreme Court Justice Ruth Bader Ginsburg is still being felt across the nation, including in North Carolina.

ABC11 held a one-on-one Zoom interview with N.C. Chief Justice Cheri Beasley to hear her thoughts on the trailblazer's legacy.

"She was able to amass a following of people who weren't even lawyers and who were able to understand because her work and her personhood transcended the Supreme Court," Beasley said.

The Honorable Cheri Beasley is the first African American woman to serve as the Chief Justice of the North Carolina Supreme Court in its 200-year history. Beasley tells Eyewitness News Justice Ginsburg helped pave a path for her and other women in the Judicial system.

'Her personhood transcended the Supreme Court':
We spoke to @JusticeCBeasley about the death of Justice #RuthBaderGinsburg. At 11, hear what the Honorable Cheri Beasley had to say about the trailblazer and American icon - who passed away at the age of 87. @ABC11_WTVD pic.twitter.com/2ooJnfKHDi

A path Browne Lewis, the Dean of the School of Law at N.C. Central, and April Dawson, an Associate Professor of Law at the university, say has inspired the next generation of women.


"As a student, she was a mother and a wife. When I was in law school, I had my first child, I was married, so I could relate to her," Dawson said.

Dean Lewis, who was very emotional about the loss of Justice Ginsburg, states it was Ginsburg's perseverance through all hardship and roadblocks that inspired her. "Her tenacity, the fact that she was able to come back from cancer so many times".
Both women have a strong, extensive background in law. Lewis and Dawson say the male-dominant career path is seeing a breakthrough. Now, it's about striving for more diversity and equity.

Chief Justice Beasley recalled having a brief interaction with Justice Ginsburg back in September when she made a stop at Meredith College for a lecture. She recalls Ginsberg being very family-oriented, kind, and attentive to the changing landscape within the justice system.

"There were hundreds of women who were so excited, and there was such energy in the air for her presence and for her presentation," Beasley said.

Despite only standing at around five feet, Chief Justice Beasley says her bravery and perseverance, despite the waves of opposition through the decades, made Justice Ginsburg stand taller than anyone.