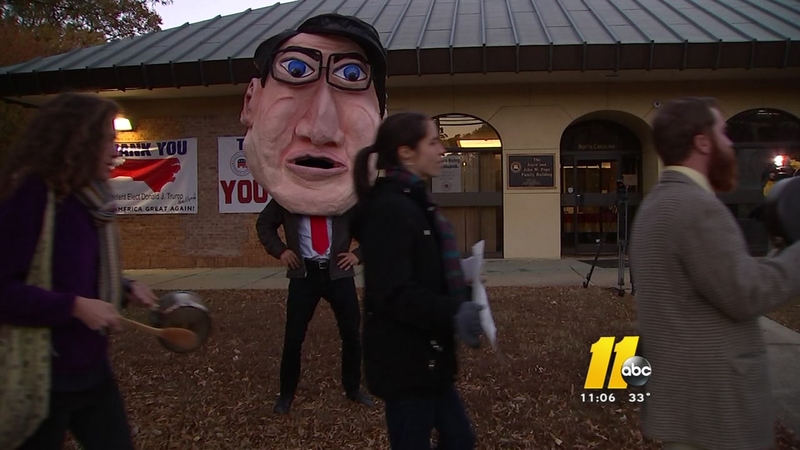 RALEIGH (WTVD) -- Tuesday marked two weeks since Election Day, and Tuesday was also the day Gov. Pat McCrory's campaign elected to prolong the race for governor as long as possible.

The delays in counting and certifying vote counts forced North Carolina's State Board of Elections to hold a special session on Tuesday. The five member board - three Republicans, two Democrats, and all of them appointed by the governor - heard arguments from both McCrory's campaign attorneys and attorneys representing Attorney General Roy Cooper.

There are calls for #GovMcCrory to move on & concede. Demonstrators bring in rather large prop for protest => a UHaul Truck. #abc11 #ncpol pic.twitter.com/6ZtJn0plaG

The McCrory campaign has so far filed at least 52 protests and challenges in as many as 34 counties. The challenges allege a number of votes should be disqualified because the voters are either dead, in prison, or ineligible because of some other reason.

"This inquiry should continue and the process should play out," Knight added.

Two rallies tonight calling on #GovMcCrory to concede in gubernational race and now also, a petition for USDOJ to intervene #ABC11 #ncpol pic.twitter.com/4SoUHfVWl6

"In 2012 and 2008, literally thousands of voters who registered same-day vote, were found not to be verified and were taken off the active voter rolls," De Luca said. "But it was too late, their votes have already been counted. So I think that it's better to do the process correctly,"

Democrats, meanwhile, were losing patience with the Republican arguments, asserting that the vote count is accurate - showing Cooper in the lead.

"The county boards are doing a good job so far, and North Carolina is the envy of the country when it comes to the election administration," Allison Riggs, a voting rights lawyer, told board members. "There is absolutely no evidence of systemic voter fraud."

NCGOP Executive Director Dallas Woodhouse issued a statement Tuesday criticizing Democrats for "insisting that their man Roy Cooper occupy the Governor's mansion before all votes are counted, and even before the Governor's first term is complete."

Woodhouse also said that "Roy Cooper and his super PACs, Progress NC and Democracy NC, have now shown they care nothing about counting all votes and treating all voters the same. ... How ironic it is that left wing groups sued to force North Carolina to permit the cumbersome process of letting people vote out of their precinct on Election Day, and now that they won that battle, they want to keep anyone from legitimizing those ballots. Their blood thirsty partisan political desires have gone too far this time."

Trey Nix, the campaign manager for Roy Cooper, called McCrory's actions a "last-ditch effort from Governor McCrory to delay and deny the results of this election." Nix said in a statement that Cooper campaign is confident a recount will not change the results.

In its agenda, the State Board considered the following questions:

1) Whether, as a matter of law, county boards of election may retrieve the ballot and discount the votes of an individual found to be ineligible, though no challenge was timely brought under Article 8 of the N.C. General Statutes.

2) If so, whether the basis for a determination of ineligibility may be brought as a protest of election under Article 15A of the N.C. General Statutes or through administrative processes pursuant to G.S. 163-82.14 or 163-182.5.

3) If so, what procedures should be followed to afford necessary due process while ensuring the timely and accurate authentication of election results.

SEE THE FULL AGENDA AND LINKS TO STATE LAWS HERE

In the end, board members agreed that the counting process must continue and county canvass as should work towards certification, which is the ultimate end of the election.

Still, the board left open the possibility to hearing appeals and challenges only if the number of votes being questioned is enough to alter the outcome of the election.

The state board is scheduled to meet again on November 29th.

Also Tuesday afternoon, the Durham County Board of Elections announced that a provisional ballot protest filed Friday by John Posthill has been withdrawn.

The withdrawal came after the Durham board investigated to see whether provisional ballots had been incorrectly included with the tabulated ballots. It was determined that only one provisional ballot had been included, therefore, Posthill decided to withdraw his protest through his attorney, Thomas Stark.

Because of the protests, only 12 of the state's counties have been able to certify their results despite a November 18 deadline.

In a video released on social media Sunday night, Cooper said again that he has won the race for governor. He said that McCrory's team is using "misleading and dishonest rhetoric" to undermine the results of the election. Monday, he announced he's naming members of his transition team.

But McCrory's team says not so fast.

"Roy Cooper thinks he's the Governor-elect of what? The voting dead?" countered Woodhouse on Monday. "Roy Cooper should respect the process to ensure all legally cast ballots are counted before measuring the drapes."