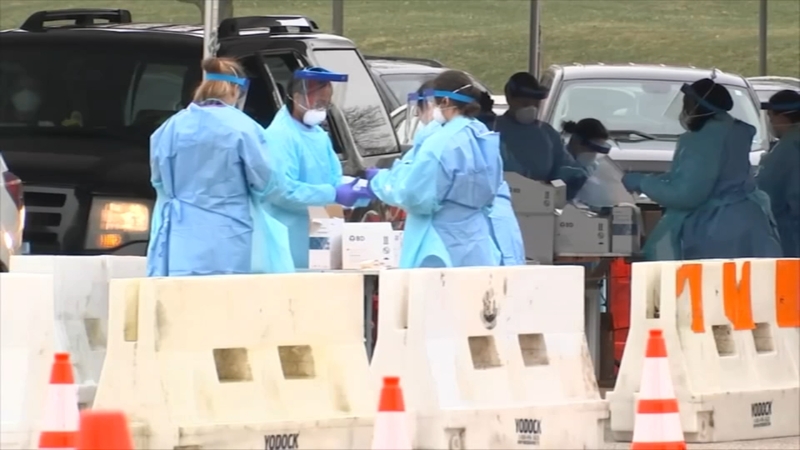 RALEIGH, N.C. (WTVD) -- COVID-19 infections increased by 43% in Wake County during the past week.

The county is averaging more than 800 cases for every 100,000 residents; the highest in the state. The rise in infections and other metrics led the county to jump from "low" to "medium" risk on Wednesday. Wake County is one of only two counties in North Carolina at this risk level.

Cumberland County saw a 40% increase in cases and Durham County reported 20% more cases in the past week.

Despite the increase in cases, the true number of infections is likely much higher as at-home testing remains popular.

"People need to recognize that we now don't count those cases as accurately as we used to because many people now fortunately now have widely available access to rapid tests that don't get reported into the systems the way they used to do. So the reported cases are likely a really significant underestimate of the actual number of COVID cases," said Dr. Cameron Wolfe, an infectious disease specialist at Duke Health.

Wolfe said because of this officials and residents need to rely on other metrics. Unfortunately, those are increasing, too.

The number of patients hospitalized increased by 21% since last Wednesday in North Carolina.

"Whilst the number of cases has gone up quite a lot in the last month, the impact on hospitals whilst going up is not nearly as sharp as it was in say last year. That's a good thing. So the impact of these cases is less but the number is absolutely going up," Wolfe said.

It's a trend seen across the nation as new variants of Omicron pop up. Over the past week, cases increased by around 29% in the United States.

"It has just become more infectious again. So it takes less time around sick people than it did say this time last year for you to get sick," Wolfe said.

Another concern is the increase in deaths among the vaccinated population.

Wolfe said this doesn't mean that the vaccine has stopped working.

Wolfe said even people who caught Omicron this past winter are starting to report reinfection.

"Don't fall into the trap of thinking, 'Hey, I got sick in January. That's it. I'm done. Pandemic over. That's not the case. It's just not the case," he said.

Despite the uptick, Wolfe said he doesn't predict this surge will disrupt day-to-day activities as much as past surges.

As cases rise across the board, it's also impacting children. Around 93,000 child COVID cases were reported last week. This is the highest weekly total since February.

The U.S. Food and Drug Administration authorized a booster for children ages 5-11 years old earlier this week. The Center for Disease Control and Prevention has to formally recommend the booster which is expected to happen later this week. Nationwide only around 43% of eligible children (5-17 years old) are vaccinated, based on federal data.

Experts continue to push the vaccine, especially the most recent booster as the best tool to fight off infection.

"The virus is getting a little bit better at getting around immunity and our immunity wanes over time. But I think you know, and the older you are, the quicker it falls. So someone who's 75 and got vaccinated in December is likely to have less memory of that vaccine than someone who's 25 and got vaccinated in December," Wolfe said.
Report a correction or typo
Related topics:
health & fitnessraleighillnesscoronavirusi teamwake county newscovid 19 outbreakcovid 19
Copyright © 2022 WTVD-TV. All Rights Reserved.
I-TEAM
Homeownership becoming more expensive in the Triangle
Durham tackles mental health crises in new ways with 'HEARTS' program
Fourth of July 2022 will cost families more this year
Daily Harvest responds after customers sickened, hospitalized
TOP STORIES
Local law students react to swearing in of Ketanji Brown Jackson
Homeownership becoming more expensive in the Triangle
RDU gears up for busy July 4th holiday passengers
Governor Cooper signs bill that keeps hemp industry lawful
Raleigh woman named in long lost Emmett Till case warrant
Misdiagnosed 'miracle baby' improving thanks to last-minute treatment
Wake First Responders, Officers, Volunteers honored with CIT awards
Show More
FBI raids Fayetteville church accused of operating as a cult
Durham's East End Connector opens after construction delays
Cruise ship hits iceberg in Alaska, returns to Seattle for repairs
ABC11 to present Raleigh's July 4th fireworks show at Dix Park
Jackson sworn in as 1st Black woman to sit on Supreme Court
More TOP STORIES News