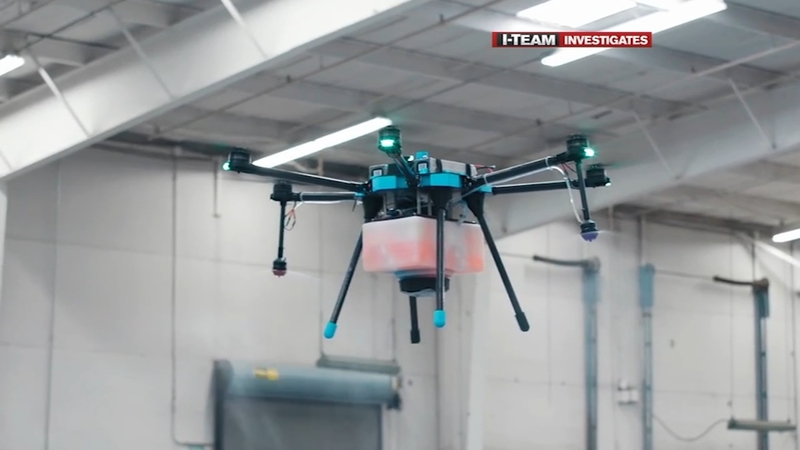 CHARLOTTE, N.C. (WTVD) -- What started as a humanitarian project may now be the key to restoring livelihoods lost amidst the COVID-19 pandemic.

"Whatever I did after college, I wanted to make a positive impact on the world," Andrew Ashur, CEO and co-founder of Lucid Drone Technologies, told ABC11. "To be a catalyst to helping restart our economy and get people back to work and ease as much suffering as possible -- that's a huge end goal for us.

Ashur's team has created a fleet of drones it is touting as a groundbreaking solution to sanitize large venues such as stadiums and arenas in a short amount of time. The hexacopter drone, officially named Lucid S1, is about four feet in diameter and weighs 29 pounds.

"Professional sports stadiums, warehouses, distribution centers," Ashur said. "It's just as effective as spraying by hand but much more efficient. On average our drones are cleaning up to 14 times faster than what you can with traditional methods."

Ashur first met Adrian Mayans on the Davidson College baseball team in 2017 and later befriended David Danielson, who lived in the same dorm. They would become an inseparable trio, playing pickup basketball and listening to podcasts about building a business.

Eventually, and spontaneously, they would find their own idea for a startup: the next generation of window washing.

"We saw window washers hanging off the sides of buildings on lifts, ladders and scaffolds. Our first thought was how can we leverage existing technology to make that a safer job?"

They submitted the idea for the Avinger Scholarship, a $5,000 contest that Ashur said would have been key to building their first drone.

"The judges said, 'They want to do WHAT with that drone?'" Ashur recalled. "So, we lost, but we continued to believe in our idea."

That conviction led the team to take summer jobs and earn money for their first test drone, which they then submitted for entry to the Davidson Venture Fund Competition. They won $25,000. Lucid Drone Technologies was born.

"We just saw a problem in the world, and we wanted to solve it," he said.

The new coronavirus and spread of COVID-19 hit home for Ashur and his partners; a close friend tested positive, forcing them all into a strict 14-day quarantine.

Stuck at home but still in constant communication, Lucid's top brass then considered a new idea -- what if washer fluid was replaced with disinfectant?

"There's one thing we really recognized we had done really well over the last couple of years, and that's applying chemical solutions with our drones. So, we began to look at how we can re-purpose our technology," Ashur explained.

Lucid then got another big boost from Davidson College when the Athletics Department invited them to test the drone at Richardson Stadium, potentially paving -- or spraying -- the way to a return to fans in time for football season.

The company, in fact, is also in touch with NFL teams, which are considering the service for their own stadiums. Several area manufacturers, meanwhile, have already contracted with Lucid to sanitize their own supply lines and distribution centers.

The drones can apply disinfectant in one of two ways: it can be tethered to a large tank on the ground (and fly within a 150-foot radius) or it can carry up to two gallons of solution in an on-board tank.

Ashur said Lucid has been using a luminometer and other instruments to test the efficiency and effectiveness in how the drone applies sanitizers, but experts are cautioning against the drone being a "magic bullet."

Ben Chapman, Food Safety Researcher and Extension Specialist at NC State University, likens the sanitation drones to planes or towers applying pesticides and fertilizers on farms -- which are all weather-dependent.

"Rain is something I would be concerned about when it comes to effectiveness," Chapman told ABC11. "What you're trying to get is have that disinfectant hit that surface for a specific amount of time that we refer to as 'contact time' where we know if the disinfectant droplets are there, they need time to act in a specific concentration on coronavirus or other things we're trying to control."

In other words, Chapman warns, rain could dilute the cleaning compound. It also presents a problem that a rainy week could potentially wipe out the time needed to disinfect a stadium before the game.

Research on COVID-19, moreover, is still muddled on whether the virus can spread via surface contact.

Still, Chapman insisted he is "hopeful" that Lucid's drones can be a valuable tool for North Carolina in its reopening plans.

For Ashur, even boosting consumer confidence is an attainable goal, so if sanitation drones can help alleviate a fan's concerns, then it's mission accomplished.

"We're privileged to be in a position where we can keep working day in and day out, but we know many people aren't," he said. "It's a really exciting role to play and what most excited me about this business early on is the humanitarian impact."
Report a correction or typo
Related topics:
businesscharlottencsmall businesscoronavirusreopening nci teamcovid 19 pandemicsmall business survival
Copyright © 2022 WTVD-TV. All Rights Reserved.
I-TEAM
Monthly tax credits end, force some NC families to make cuts
Body camera footage shows moments after Jason Walker's death
Ethics commission dismisses allegations against FPD Chief
More than $10M of PPE left in the rain in CA county
TOP STORIES
LATEST: Testing centers opening on delay Monday
Family demands justice after 23-year-old woman found dead after date
5 tax changes that can boost your refund this year
Triangle Restaurant Week returns to highlight local small businesses
Woman finds $3M lottery prize in her spam folder
Child care program available in Wake County for $30
School closings and delays
Show More
Fauci optimistic omicron will peak in February
Many seek N95 masks amid high COVID cases
GoRaleigh bus crashes on Glenwood Avenue
After the omicron wave, what's next for the COVID pandemic?
One person injured in Raleigh shooting, police investigating
More TOP STORIES News