Police: Still no evidence of gunshot fired at Crabtree Mall 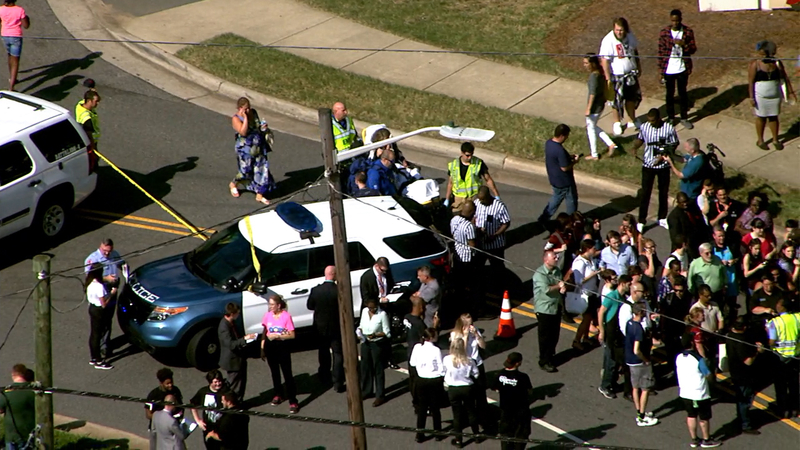 RALEIGH (WTVD) -- Raleigh police announced Sunday evening that they are still investigating but so far have not found any evidence of a gunshot.

Crabtree Valley Mall reopened Sunday, but folks in the Triangle are still waiting for answers surrounding the chaos that erupted Saturday.

In a news release, authorities said they have not found an explanation for the loud noise that people reported. Officials said all known witnesses had been interviewed.

A loud bang was captured on video from the mall

Police said their active work at Crabtree Valley Mall in Raleigh was finished Saturday night after the mall placed on lockdown in the afternoon. Police responded to reports of a shooting around 2:30 p.m. Authorities said follow-up investigations are under way.

Officials held a press conference just before 6 p.m. and said they had not determined if there was a shooter, and no one was in custody.

Anyone who believes they left behind items during the frantic evacuations should contact Crabtree Valley Mall or visit their Facebook page. According to a post on the mall's website, people can pick up items starting Sunday at noon in the Community Room beside the HWY 55 restaurant near the food court.

Authorities were working Saturday evening to get people back to their cars. Police escorted customers back to the mall parking lot from the Marriott across the street where they had waited in the heat for hours.

Federal authorities and ATF officials are helping in the investigation. Our crew at the scene said police announced to the crowd shortly after 4:30 p.m. that no one had been shot in the mall.

Police and EMS officials said 8 people with ages ranging from 10 - 70 were taken to local hospitals with non-life threatening injuries related to crowds fleeing the mall. No gunshot wounds were reported.

Viewers sent in video to ABC11 of police releasing shoppers and employees from stores inside the mall. Crowds of people were being lead out.

.@raleighpolice allowing people who have their car keys to get to their vehicles. #ABC11 pic.twitter.com/DRsFy2e4Xf

Antonio Richardson, who was in the mall at the time, told the Associated Press he was standing at the entrance to a clothing store Saturday afternoon when he saw two men who appeared to be in their early 20s arguing in the food court.

He says he saw one of them pull out a gun and begin shooting. As he was running away, he says he heard as many as four shots in all.

One eyewitness told ABC11 the floor was shaking due to everyone trying to get out.

"We were about to walk in the food court and we heard the gun shot. I heard the shot and literally the floor... it was shaking," she explained. "The floor was shaking because all the bodies, everyone was trying to get out of there as fast as they could."

Police said although they had not found anyone with gunshot wounds, there were reports of trampling injuries due to crowds fleeing.

"I was totally caught off guard though and I'm a foreign combat Marine. I mean I know something about being under pressure, but when something like that rolls up on you I had no idea," recalled eyewitness Kevin Cameron. "My impression was the shooter was right behind these people, the way they were running."

Cameron said he pushed his wife out of the way to protect her and she fell.


ABC11 talked to Mark Rush, an eyewitness who said he was only 10 or 15 feet from the incident. He said he heard about 5 or 6 shots as he was walking out of a cell phone accessory store. He was with his family and said that "it was probably the scariest thing he went through in his life." He grabbed his stroller and his family and ran out of the mall right after it happened.

An eyewitness said huge crowds fled the mall after the shooting

Other eyewitnesses said they had to run out of the mall as well. ABC11 spoke to a woman who was in the food court when the shooting happened. She said they heard "something pop" and then "pandemonium broke out." She said people were running over tables and chairs to get out of the mall.

ABC11's Elaina Athens on scene after talking to eyewitnesses

The eyewitness in the food court said she "played dead" with her kids and then someone urged her to get out.

Another eyewitness, Dan Fahey, said he was eating with his wife at P.F. Chang's when he saw a huge "throng of people" leaving the mall, "running at full speed."

Someone just got shot at Crabtree and it was so scary me and Olivia are crying oh my god live footage !!!! pic.twitter.com/IAymO1xo8C