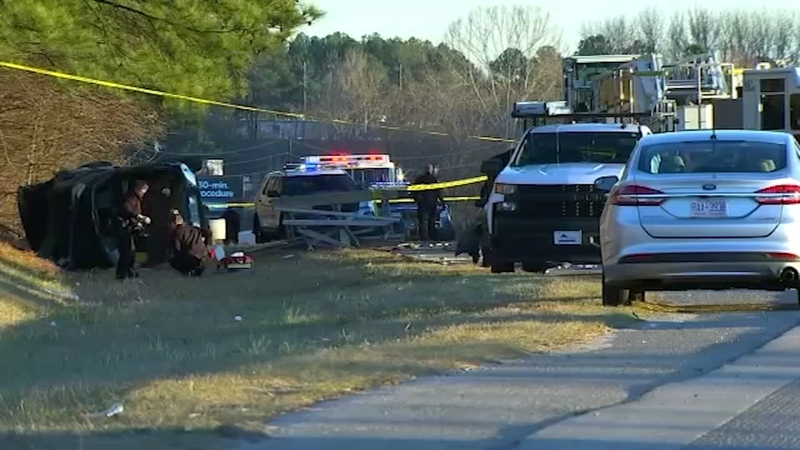 Turcios shot 5 times after crash on I-440, RPD reports

Turcios was shot and killed by police officers on the side of Interstate 440 in the early afternoon of January 11. It happened after Turcios was involved in a crash on the interstate between New Bern Avenue and Brentwood Road.

Turcios' family, joined by social justice activists, spoke publicly Tuesday. They questioned the police narrative about Turcios being intoxicated and threatening officers with a knife.

Instead they said he was disoriented from being knocked unconscious in the crash and from not being a native English speaker. They also said the knife was simply a pocket knife, and that officers shot Turcios multiple times well after he could have been thought to be a risk to anyone.

In the five-day report, RPD reveals that all officers at the scene of the crime had body cameras and dash cameras recording the incident. The department has filed a petition to be able to release the video to the public.

CLICK HERE to read the full five-day report for yourself.

"It is extremely pertinent and important that this body camera footage is released -- because as we have all read and seen, Raleigh Police account of this report and eyewitnesses on the scene account differs a lot," said Kerwin Pittman, an activist with Emancipate NC.

Activist Kerwin Pittman said he and the family of Daniel Turcios are concerned with the version of events in Raleigh Police's 5-day report on the deadly shooting.

Pittman added that the family is "extremely concerned" about the variations in the report.

The report said five officers responded to the crash near Exit 12 on westbound I-440. Multiple people called 911 about the crash, including one who said the driver of the overturned vehicle had forced him off the road prior to the crash.

Officers at the scene determined Turcios, his wife and their two sons (aged 20 and 7) had been in the overturned car when it crashed.

Officers said witnesses at the scene told them that Turcios had a knife. When they saw his knife for themselves, three of the officers pulled out their guns and told Turcios to drop the knife.

Police said Turcios' wife also asked him to drop the knife, but he refused.

"We realize the language is clearly vague," Pittman said. "So it leaves one to imagine that he had some type of butcher knife in order to be shot that many times. But we know from eyewitnesses' accounts that it was a pocket knife. So we're not surprised that this kind of language is being used in this report. As well as this narrative is extremely different on both sides."

Police said he then tried to take his injured 7-year-old son and leave the area. Turcios' wife stopped him from taking the boy, but Turcios continued walking away from the area.

Officers followed him and gave him approximately 12 commands to drop the knife. One officer, identified in the report as Sergeant W.B. Tapscott, used a stun gun to try and stop Turcios; he fell to the ground and four officers went at him to place him in custody.

This is when Officer A.A. Smith fired two shots from his firearm. Those shots knocked Turcios to the ground. RPD said with the knife still in his hand, he tried to "get back up and advance towards" Smith. That's when Smith fired three more times.

Pittman claimed that after the first shot, Turcios did not get back up.

"The main thing that the eyewitness is disputing tonight is that Daniel did not get back up after those first shots.," Pittman said. "That he was shot while he was on the ground and that he did not attempt to get back up nor did he wield a knife at law enforcement."

The report said there were approximately five seconds that elapsed between the first two shots and the final three.

The State Bureau of Investigation is conducting a full investigation into the shooting and will present its finding to the Wake County District Attorney.

In the meantime, Tapscott and Smith have been placed on administrative leave pending the outcome of the investigation.