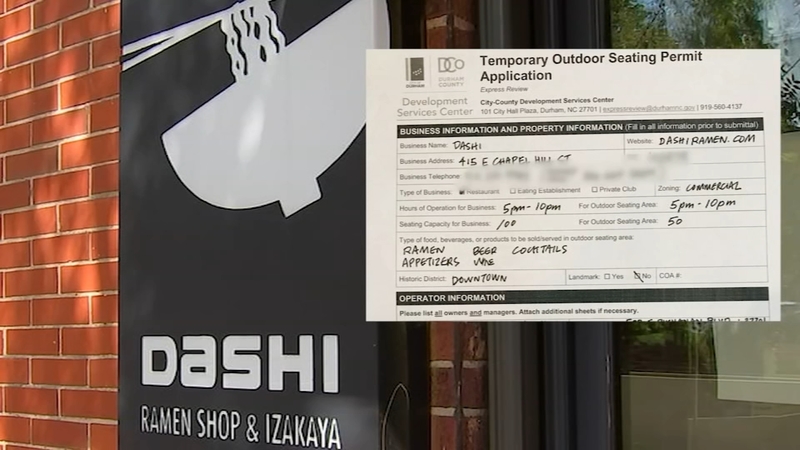 DURHAM, N.C. (WTVD) -- After six and a half months of being closed, Dashi, a popular Durham ramen spot hit a major roadblock on its way back.

Just last week, they debuted their outdoor seating on East Chapel Hill Street, but not long after, the City of Durham told the restaurant co-owner Nick Hawthorne-Johnson he had to dismantle the setup.

"We built the planters and the seating area so we could utilize it and apparently the city didn't consult with the fire department," he said.

The city of Durham said it wasn't the fire department so much as Hawthorne-Johnson's permits. They were approved but only for movable tables and chairs. The permit said a lane closure was part of this as well but not for the platform he had set up.

The @CityofDurhamNC tells me tonight @DashiRamen got a permit for tables and chairs but not to build the structure that was out on East Chapel Hill Street. The permit did include a lane closure though. The co-owner tells me the whole situation is "disappointing." #abc11 pic.twitter.com/mmH8BcHDqw

Nick said he spent around $10,000 on the seating area and nearly $50,000 getting everything back up, including hiring back staff.

Dashi now has a set up down the block which he calls a "degraded experience for our guests."

Co owner of @DashiRamen is moving his set up down chapel hill street in @CityofDurhamNC after city says he has to move the set up he had in front of his restaurant. Says he’s out of pocket $50,000 #abc11 pic.twitter.com/Fq58Xc3zhS

Hawthorne-Johnson said it's harder to do service and waiters are now having to carry tables and food 80 feet and across an alley.

The restaurant co-owner said he's trying to be optimistic about everything because he knows everyone is struggling including the city. He was hopeful the city would have more out-of-the-box ideas.

"The small business community in Durham already feels like we haven't seen the rolling up of sleeves and the wading into the situation and decisive action and leadership that we expected," Nick said.