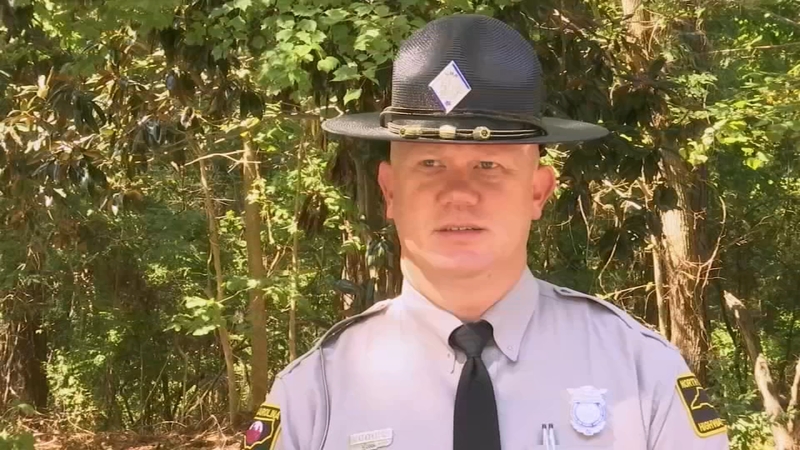 PITTSBORO, N.C. (WTVD) -- In an exclusive interview with ABC11, State Highway Patrol Trooper Rodney Cook is detailing his role in a standoff with an armed suspect inside a Pittsboro credit union.

Cook, a 13-year veteran, was about to meet with a kindergarten class in Siler City when he received a call about a situation in Pittsboro. Initially, the call was for a possible bank robbery in progress.

"They advised that they had a subject in the bank that was armed that stated they would only surrender to myself," Trooper Cook said.

Cook said it took about nine minutes to respond to the scene.

EXCLUSIVE: Last Thursday, @NCSHP Trooper Rodney Cook was set to meet with a kindergarten class when he got a call about a situation at a Pittsboro bank. Inside, a suspect was holding the manager hostage, and requesting to speak specifically with him. His story at 6 on @ABC11_WTVD pic.twitter.com/L7Sh6Ujgso

"Disbelief. I didn't understand why somebody was just requesting myself, and not the Sheriff's Office," Cook said.

The suspect, 54-year-old Kevin Francis Laliberte, remembered Cook from an incident he was involved in on September 3. In that case, Laliberte was cited for running a stop sign before he crashed a vehicle into an embankment.

"He was very upset about that because it wasn't his vehicle that he had wrecked. But he was a polite individual, he was just going through some tough times. Said he didn't have a job or anything to cover the damages," said Cook, who did remember Laliberte after pulling up his file.

Around 11:45 Thursday morning, Laliberte had entered the State Employees Credit Union, asked for the manager, and fired two shots. By the time Cook arrived on-scene, Laliberte was with the manager inside the building. During the standoff, Laliberte had the citation that Cook had written him.

Cook worked with Chatham County Sheriff Mike Roberson and Pittsboro Police Chief Percy Crutchfield while negotiating with Laliberte. During those negotiations, the bank manager was able to escape through a back exit. At that point, Laliberte and Cook began discussing how the stand-off would end.

"I did not feel comfortable going in the doorway with him with a firearm already. What I wanted him to do would be to drop the firearm and come out the door with his hands up, which he complied with," Cook said.

Cook said Laliberte did not make any threats toward law enforcement officials during their interaction, nor did he reveal any motive for his actions.

Laliberte is facing several felony charges, including second-degree kidnapping, two counts of possession of a firearm by a felon, and 15 counts of discharging a weapon into occupied property.