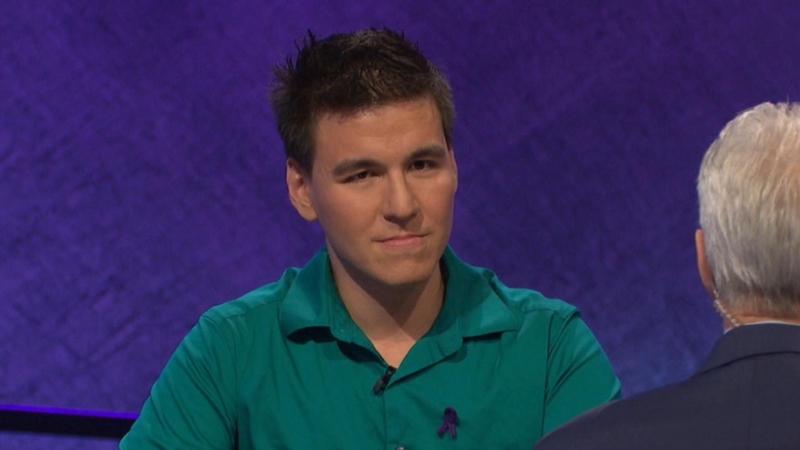 CULVER CITY, Calif. -- It seemed only a matter of time before "'Jeopardy!' James" Holzhauer overtook Ken Jennings' regular season winnings record, but it was not meant to be.

Leading into the Monday, June 3 show, Holzhauer had $2,382,583 in the bank, putting him at a close second behind Jennings' $2,520,700 in regular-season winnings. That means he would have needed to continue winning long enough to earn at least $138,117 to pull into first place.

Those who had done the math expected him to pass Jennings on Monday or Tuesday, so Holzhauer fans will be disappointed to learn that his run ended Monday just shy of the record.

Holzhauer's 32-game winning streak ended thanks to Emma Boettcher, a librarian at the University of Chicago. Boettcher won the game with $46,801, while Holzhauer came in second with $24,799.

"Emma dominated her warmup games that day, and I knew she would make an extremely tough challenger," Holzhauer said after the game. "I was still incredibly impressed by her courage on that 'True Daily Double.' I'm proud that it took a top-level player at her absolute best to eliminate me."

Holzhauer accumulated a total of $2,462,216 in winnings and set several new single-game winnings records over the course of his 33 games. Including Monday's winnings, his streak ended $58,484 shy of all-time regular season winnings record set by Ken Jennings.

Actual photo of James Holzhauer walking off stage at Jeopardy, his reign of destruction completed. pic.twitter.com/Xdf5PFR3QD

Holzhauer, a professional sports gambler from Las Vegas, is unquestionably the game's fastest earner to date. His style of play, which sees him often betting large sums on the daily doubles, has led him to earn more than $100,000 in a single game on multiple occasions. He was poised to overtake Jennings' record in just a fraction of the time.

Rumors of his loss began to circulate after a one-minute video popped up online appearing to show him losing for the first time. "Jeopardy!" would not comment on the outcome of Monday's episode before it aired.

It took literal perfection to bring Holzhauer's run to an end. Holzhauer, who got 97 percent of clues correct during his run, pointed out that Boettcher did not miss a single clue on Monday's show.

CONGRATULATIONS to Emma on a world-beating performance. There's no greater honor than knowing an opponent had to play a perfect game to defeat me.

Holzhauer has made quite the impression on the show, appearing in all four categories in the official "Jeopardy!" Hall of Fame.

When tournament winnings are factored in, Brad Rutter is the winningest "Jeopardy!" contestant, with $4,688,436 in all-time winnings. Jennings is second with $3,370,700, and Holzhauer is third with $2,382,583. Holzhauer is second in most consecutive wins (Jennings is first). In the single game winnings category, Holzhauer dominates every spot in the top 10.

The show confirmed that Holzhauer will return in Season 36 for the next edition of the Tournament of Champions.

Click here to find out when to catch "Jeopardy!" in your city.