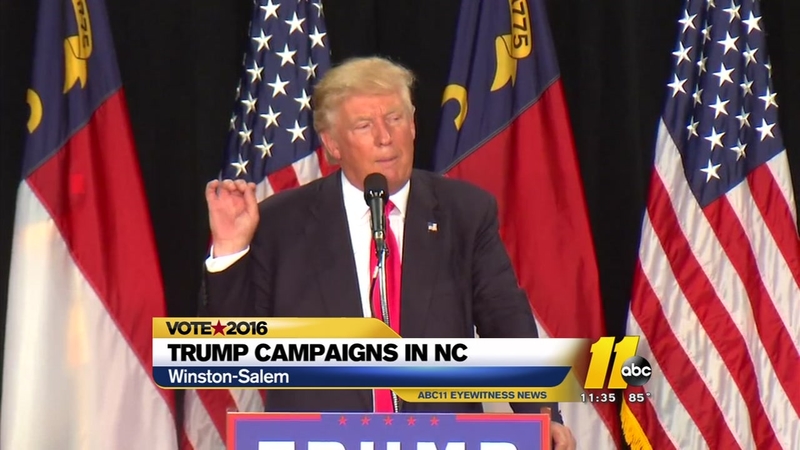 On Monday night he spoke to thousands of supporters at the Lawrence Joel Veterans Memorial Coliseum in Winston-Salem.

The governor got right to issues after making a joke about bathrooms.

"And if any of you need to use the restrooms," said the governor before the room erupted in cheers. "And if you have any questions go to the Philadelphia convention center where all the democrats are."

Then he jumped right into the issues, telling the crowd that America and North Carolina needs an outsider like Donald Trump. He said he himself came to Raleigh as an outsider.

"Our government here in the state was broken. We owed the federal government $2.6 million for unemployment," said McCrory. He went on to say teachers had gone years without pay raises, and that the state had a deficit of several hundred million dollars.

"We need an outsider," said the governor.

When Trump took the stage, he criticized the soon to be former DNC leader, Debra Wasserman Shultz for accusations she supported Clinton over Sanders.

Trump also talked about poll numbers. One poll showed him leading Hillary Clinton by three percentage points, while another poll showed the two as tied.

Meantime, before the 8 p.m. rally got underway, supporters lined up outside for hours, waiting to get their spot inside.

"You're going to be known as the president that saved our nation," said Jane Myers from Clemmons, NC, in a message to Donald Trump.

She was one of many in line leading the crowd in chants and cheers outside the coliseum.

Trump will head to Charlotte on Tuesday to address the VFW there, just as Clinton did on Monday.